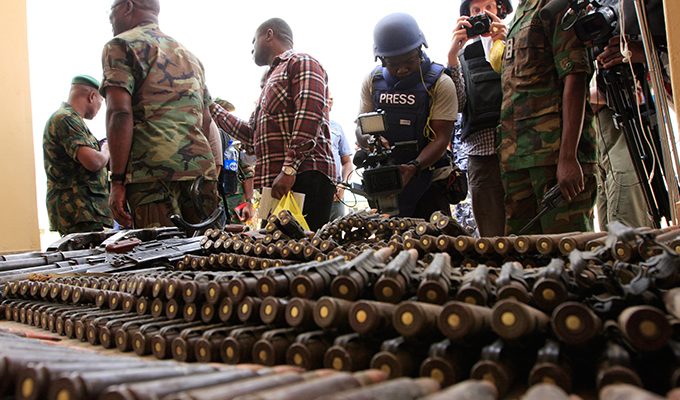 Importers Association of Nigeria (IMAN), the military and Police have thrown their weight behind a bill in the House of Representatives seeking to give legal backing to the Economic Communities of West African States (ECOWAS) Convention on Small Arms and Light Weapons.

The stakeholders stated their various positions at a public hearing on; ‘ECOWAS Convention on Small Arms and Light Weapons, their Ammunition and other Related Matters (Ratification and Enforcement) Bill’ held in Abuja yesterday.

It will be recalled that the Bill passed second reading at the plenary on Wednesday, 14th July, 2021 and was referred to the Committee on Treaties,

In his presentation, Chief of Defence Staff, Lucky Irabor who was represented by T. O. Yusuf (Air Vice Marshall) welcomed the bill, saying it tackles the proliferation of small arms and light weapons, fast becoming a threat to the security of the country.

He, however, said that due diligence was needed on the bill as it appeared it will establish an agency with functions duplicative of the National Commission Against the Proliferation of Arms and Light Weapons, an executive bill before the National Assembly.

He said: “On proposed bill, it was well received and it is pertinent to state that DHQ is of the view that the proliferation of small arms and light weapons in Nigeria poses a systemic threat to the nation’s long term socio-economic development as well as security,”.

He said: “The Nigerian Police Force encourages law enforcement agencies of ECOWAS member states to support joint action both at international, regional and national level to stamp out the rising illicit traffic link to organized crimes and terrorist activities”.

In a position paper,  the Chairman of IMAN Special Task Force, Chijioke Okoro prayed the House to speedily pass the bill and also ensure that all other stakeholders in the establishment of the commission be carried along.

“it is internationally known that Importers Association is strategically placed at a vantage position to help government checkmate all categories of importation of goods and services whether legal or illegal and thereby serve as perfect infiltrator to filter all imperfections elements right from the countries of origin”, he said.

Earlier in his welcome address, the Chairman House Committee on Treaties, Protocols and Agreements, Ossai Nicholas Ossai, said the Bill seeks to give legal effects in Nigeria to the ECOWA Convention to checkmate the security challenges precipitated by small arms and light weapons proliferation.

“The overall objective of the strategy is to prevent, combat, and eradicate the illicit proliferation, circulation and trafficking of small arms and light weapons in an integrated and holistic manner across all regions of Africa.

“It has therefore become necessary, Hon Colleagues, Ladies and Gentlemen that today’s engagement would further encourage the seamless domestication of the several international instruments to which Nigeria as a state party is yet to effectively and legally internalize,” Ossai added.