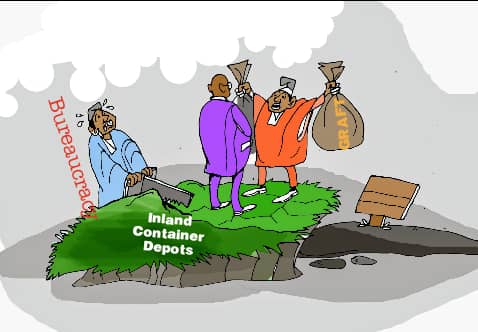 In 2002, the Nigerian Shippers’ Council mooted the idea of establishing Inland Container Depots (ICDs) in different parts of the country.

The idea was driven by the desire to take shipping services to the hinterland as well as decongest the already over-stretched Lagos ports.

After going through the labyrinth of government bureaucracy, the idea crystallised into a project which effectively took off in 2006.

The project, which was patterned on Build, Own, Operate and Transfer (BOOT) model, consists of seven ICDS and Float Stations concessioned to private business interests.

They are sited in the six geo-political zones of the country .

Dala Inland Dry Port Nigeria Limited oversees the ICD located in Zawachiki, Kano state with TEU capacity of 20,000 while the one sited at Heipang, Jos, Plateau state with 20,000 TEU capacity is being managed by Duncan Maritime Services.

However, no sooner had they won the bid to manage these dryports than they went to sleep, thus keeping this laudable project in limbo for several years.

nigeriamaritime360.com is saddened by the state of inertia to which this project has sunk.

After 14 years of unnerving inaction by the concessionaires, the only flicker of hope was given by the ICNL whose ICD in Kaduna was commissioned by President Muhammadu Buhari 2018.

It took the threat by the Nigerian Shippers Council, the facilitator of the project before some of the operators revved into action.

Hassan Bello, the Executive Secretary of the Council in 2017,had threatened to withdraw their licences if nothing was done on the project.

The threat however had little impact because it was only one out of the seven ICDS that was completed, 14 years after the project kicked off.

While two ICDS at Jos and IsialaNgwa are in various stages of completion, the rest showed no sign of life, despite the threat.

The situation became so frustrating that Bello said he would revoke the licences of two of the operators for lack of seriousness.

In as much as this platform recognises the passion of Barr. Bello and Rotimi Amaechi, the Minister of Transportation to see to the full take-off of this project, we believe that government is not tackling the real problems that are threatening to stifle the realisation of this vital project.

It goes beyond mere threat or rhetoric to ginger the promoters of the ICDs into action.

Why would the promoters of the project suddenly develop cold feet and abandon what they fought in a competitive bidding process to win?

We don’t need to look into any crystal ball to know that government has not created the necessary enabling environment to stimulate the quantum of investments this project entails, hence the frustration and lethargy of the promoters.

Firstly, government failed to define the legal framework that will underpin the operations of the concessionaires in the initial agreement, a lacuna which the operators noticed that makes them to abandon the project.

However, government discovered this lapse very late before it was corrected in a new agreement with the promoters.

Also, this platform finds it intriguing that the project was initially conceptualised and agreement struck with the promoters without factoring in the support and cooperation of the host state governments.

Some of the promoters of the project initially did not enjoy the support of their host states.

In 2005, the structure of the ICD sited in Jos was said to have been demolished by the state government.

This narratives seemed to have changed as some of the host states have come to recognise the economic importance which such facilities will have on their states.

However, we commend the efforts of the present leadership of Shippers Council and the Minister of Transportation who have changed the narrative in the relationship between the operators and their host states who have started to appreciate the importance of the project to the economic wellbeing of their states in particular and the nation in general.

This explains the visit of Kano state governor, Abdullahi Ganduje to the Lagos Headquarters of the Nigerian Shippers’Council in October to solicit for the support of the agency to revive the ailing Dala ICD sited in his state.

Another critical factor which is fundamental to the survival of the project is rail connectivity.

As a matter of fact, rail connectivity is at the core and the whole essence of the dryport project.

By virtue of its location at the hinterland, ICDs are to be fed regularly with containers from the conventional ports. This is done through railway for efficiency and cost effectiveness. We however noted with sadness that this is not the case with the ICD project.

As presently conceived, the ICD project is designed to malfunction. In as much as we don’t want to sound pessimistic, it is imperative to be blunt with the truth. Even, if the remaining ICDs are completed, they may have to struggle to survive as the only functional ICD in Kaduna is presently doing.

Currently , the ports in the country are yet to be linked with rails, except the Apapa port which is sadly linked with narrow gauge which is outdated.

This is why the Kaduna ICD is still struggling and its promoters lamenting underutilisation of the facility due to lack of much activities.

The Managing Director of ICNL, Yusuf Ismail has declared that activities in the dryport are still low. Despite the assurances of the Nigerian Railway Corporation to move cargoes to the dryport, the promoters of the facility are still relying on road transport to get cargo from the port.

We found out that the Nigerian Railway does not have the wagons and the locomotives to pull cargo from the Apapa port to Kaduna ICD.

It is also disheartening to note that presently, the NRC could move 50 boxes per week from Apapa to Kano due to the narrow gauge of the rail track. Even though the ongoing rail project of the Federal Government is standard gauge, but that one is from Lagos to Ibadan.

The above scenario only signposts the lack of seriousness of government to nurture the ICD project to fruition. The travails of the only ICD currently in partial operations will certainly send a wrong signal to other operators of what awaits them when they become operational.

It is also a bad advertisement to foreign investors who might want to invest in the project. Equally, it will not encourage banks to commit their funds into the project given the lack of basic infrastructure that is germane to the survival of the project.

We believe that it was as a result of these infrastructural gaps that the rest of the operators are foot dragging to commit their resources into the project, at least for those who are lucky to get financial reprieve from the banks.

If government is sincere with this project, it should as a matter of policy include rail connectivity from all the ports in the country to the ICD sites spread across the country.

To us, there is not much evidence on ground to support the prediction of Engineer Fedelis Okhiria, the Managing Director of Nigerian Railway Corporation , that all the ICDS will be connected to rail by 2020.

We would however wish to be proved wrong and see this prediction come to pass. Anything short of that will be a mockery of the objective of the project which is to take shipping services close to the shippers at very competitive prices.

No amount of threat by the regulatory authority will change the present apathy of the promoters of the project if it fails to do the needful.

Also, the reluctance of terminal operators to stem down containers to these ICDs is a potent threat to their survival.

That was why Gov. Ganduje appealed to the Shippers’ Council to ensure that Dala ICD be made a point of destination.

Since when the NSC has stopped double charge on cargo transfered from the ports to the ICDs, the terminal operators do not have any incentives to made this transfer to the ICDs.

Rather, the terminal operators now prefer to hold on to the cargo for maximum profits.

Unless the operators of these ICDs embark on aggressive marketing to attract cargo and stop relying on being fed by the terminal operators who are not even willing to let go of their cargo, some of these struggling ICDs may lose the battle of survival.

Until the whole architecture of the project is changed through railway connectivity and granting the ICDs full designation of port of origin that will attract requisite investments, we still have a long walk to making the ICD project an attractive alternative to the conventional ports for shippers in the hinterland.

Is a car seized by Customs retrievable?

We are not bowed by arson on NPA Headquarters—NPA MD