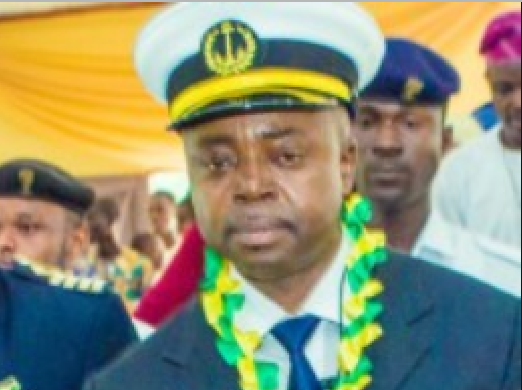 Captain Ogunsakin Rotimi Williams is our Maritime Life guest this week.
He is a member of the Nigerian Merchant Navy Officers and Water Transport Senior Staff Association (NMNO&WTSSA).

These are the professionals who we see in our midst once in awhile because the nature of their assignments requires that they stay on water for three months or more sometimes.

This seasoned sailor has experience spanning more than thirty years in ocean going business. He started as a young man who just came out of secondary school; he grew in the business until he attained the height of commanding many large vessels. He is a core seafarer because all his educational attainment after secondary school are maritime and shipping-based.

My name is Captain Ogunsakin Rotimi Williams. I am a captain wth Master Greater than 3000 Near Coastal Voyage. I command many large vessels in Nigeria.

Q. For how long have been in seafaring job?

A.   I am well over thirty years in the profession because I have never done any other job in my life. I started sailing immediately I finished secondary school before I proceeded for higher studies.

Q. Where are you from

A. I am from Ondo town in Ondo state.


Q. Which schools did you attend?

I attended Ondo Grammar school on Ondo state. I came to Lagos, I attended School of Oceanography which is now Federal School of Fishery and Marine Technology.
I attended Regional Maritime Academy in Ghana which is now Ghana Maritime University.
I did some CoCs there which is called keeper of all water which was what was reigning then.
Then I came to Nigeria and attended Maritime Academy of Nigeria, Oron where I did CoC in both Less Than 3000 and Greater Than 3000.

I used to like swallow food but as I advance in age, I now take more of fruits. Q. How do you normally relax?

Onboard vessels,you know we have duties. As a Master, the third officer works with me, i keep 8:00hours to 12:00 hours even though I am the overall boss including the engine.
I keep duty between these hours as the OOW (Officer Of the Watch). I have eight hours inbetween and if I sleep six hours out of the eight hours, I will be relaxed.
In most vessels,we have gym, we have recreational activities that we do and it is  mandatory by MLC 2006 that there must be television in some strategic places in the ship where we can watch videos, films and things like that.

Q. Do you have a favourite colour?

A. I don’t have any particular colour as favourite but most times, I see that I tend towards bluish colour and as a rest, I discovered that most of the things I have are blue colour. A.  In the past, I used to drink but I have limited everything now to maintain good health. The highest I can take now is one bottle of beer. I don’t know how to drink and get drunk. I have never been drunk before in my life but if I drink too much, it gives me headache.

Q. Is it true that seamen love women a lot?

A.  That’s not true but because people know that seamen are not always with their families but we remain decent because outside there, you don’t see women on the ship unlike these days when we are beginning to see one or two women in the ship.
Again, by law, the women are not to be embarrassed because if you are reported, it is a criminal offence. I have stayed in the ship with a woman and her cabin was just three cabins away from mine and I never entered her cabin for once.
Anytime we want to talk, we talk in public places but for chasing women from country to country is an olden days thing,  we want to compete with people on the shore.
As they are building houses, we also want to build, if you are buying cars, we want to buy and if we start buying for women all about, how do we buy our own.

Q.  Are you saying for three months on sea, you don’t see women?

A.  There is nothing except you want to have a night with sharks because for the three months, you don’t see women and sometimes, you don’t see vending match soil.
In addition, because of the ISPS Code now, you can’t just get to any port and jump down and say you are going to club. You must take proper precaution, they will sign you out and sign you in.
So, if you stay with a woman and ship leaves you, that is the end of the contract.
Those days, if ship leaves you, you can join another ship but nowadays, there are laws. Q.  What is your perception about religion?

A.  My belief about religion is that we are not honest. People tell lies with the name of Jesus Christ because if all of us are following what we are learning in the Bible, the crime rate wouldn’t have been as bad as it is today,there would not be so much embezzlement as we have today.
We even join pagans to do what they are doing and even give them energy to do more. We are not sincere.

Q.  Are you a sports lover?

A.    I used to love sports but not anymore because I see it as time consuming venture and it has no financial benefit so I developed immunity against it. I prefer walking to sitting down to watch football.

Q.  What is the memorable experience that you can never forget in your seafaring job?

A.  The experience I will never forget in my life that even prompted me to become what I am.
Around year 1990, we went to America to go and bring a ship to Nigeria and our first voyage was to South Africa to collect fish to Nigeria because the vessel was a fish carrier and one afternoon,we just saw that the ship was going down as if it wanted to capsize and all of us were crawling in the ship, we could no longer stand erect.
There was a pandemonium in the vessel. In fact,one boy was sleeping and as he woke up, he said he saw the pothole was almost touching the water and without warning, jumped outside and wanted to go and launch the life raft so we shouted that the matter was under control.
I was panicky and I fought with my room mate over who should wear the only life jacket in our room. That experience was what made me to start searching for knowledge because I wanted to know why the ship listed that way because the people onboard could not tell me.
I went to Ghana, sat in the class and eventually found out the cause and I later became very good instability because that was the problem the ship had because it attained the angle of lull.

Nigerian seafarers seek for replacement of NCV with unlimited certificate