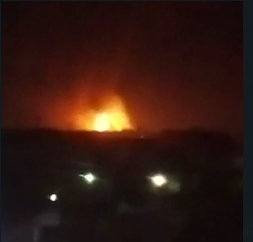 The early morning gas plant explosion which rocked Lagos on Thursday has killed eight people; burnt and injured 37 others; and destroyed 25 houses and 16 lock-up shops. This explosion, which occurred at a gas station in Baruwa area of the metropolis, came barely two weeks after the Ajuwon Iju Isaga gas explosion that killed more than two and injured 40 people.

According to reports, the explosion occurred around 5.44 am at Best Roof Gas Station located at Unity bus stop, Fatade area of Baruwa in Alimosho Local Government Area of the State.

“We do not know who dies, who lives for now and it will be after the fire is extinguished totally before these can be determined,” an eyewitness has earlier told the inquisitive reporters.

“The fire started around 5.44 am with smoke engulfing the whole of this area, and people were shouting, running helter-skelter,” she added.

But Oke-Osanyintolu said that so far, eight bodies (corpses) have been recovered, 10 houses were badly razed, three vehicles and Okada were also razed.

“A lot of those who died were burnt beyond recognition. Some have barely woken up when the disaster occurred while others were trapped while sleeping inside their bedrooms. It is so disheartening, to say the least,” Rasaki Akinsanya, who witnessed the explosion told reporters.

As at the time of this report, officials of the Lagos State Emergency Maintenance Agency (LASEMA) have been contacted and are on top of the situation.