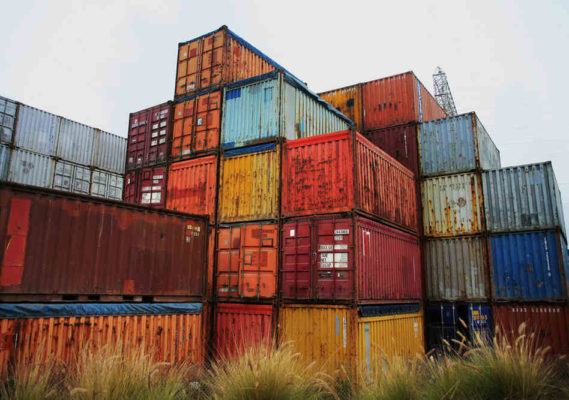 Findings have revealed that about 45 to 50 percent of the containers used in shipping goods into Nigeria have expired and have negative effects on the goods in the boxes.

It is so bad that some of the containers are patched by the side to import items into the country and this has a dire consequence, especially if the imported items are consumables

Confirming the findings, Tincan chapter chairman of the Association of Professional Freight Forwarders and Logistics of Nigeria (APFFLON), Comrade Godfrey Nwosu said that not less than 45 percent of the containers used to import goods into the country is expired.

He expressed fears that such containers can do a  lot of damage to the goods they are used to converge, especially if they are consumables or health products

He explained that most of the freight forwarders in the countries of origin are mostly responsible for the anomaly.

He also blamed the trend on the fact that the older the container, the cheaper the cost of rentage which could make Shippers’ opt for them.

He said, “45 percent if not 50 percent of the containers used for shipping goods into this country is expired. Do you know or are you aware that each container has a stainless plate that carries the identity of the container?

“Most Shippers don’t know those who do vehicular shipment because they are not in the country where shipments are made into the country, most times just tell their Shippers’ they need 40 feet container to ship goods into the country, they will do the booking and lift the box to his yard and push them here.

“Most atimes, the owners of these goods don’t have the final answer to evaluate or know the kind of box they use in carrying their shipments.

“The forwarders in the country of origin short-change them. The older the container, the cheaper the rate of renting it.

“The type of cargo sometimes determine the kind of container to use. For instance there are containers that come with pallets and the suppliers of the pallets are different from the makers of the containers”

Speaking further, Nwosu lamented lack of regulation on containers used to import goods into the country even as he maintained that it has dire consequence on the items and the consumers.

“There is no regulating standard for containers used for shipping

“Using an expired container is contagious for food items, medicaments because if the containers are expired, the wooden floors are also expired. If you use such containers with expired wooden floors for fragile or sensitive goods, the chemicals may contaminate them.

“You don’t just import health equipment with any container, it requires that the standards be maintained to avoid being contaminated”.

Alao speaking, Onome Monije, Public Relations Officer of the Association of Nigerian Licensed Customs Agents (ANLCA) said that the development could cause damage to items contained in them

She added that there is no always time for the agents to forward their complaints because of fear of demurrage accumulation.

“Most times, we are running to avoid demurrage, we tend not to give much attention to such cases because if you write to shipping companies, it will take time for them to reply you.”