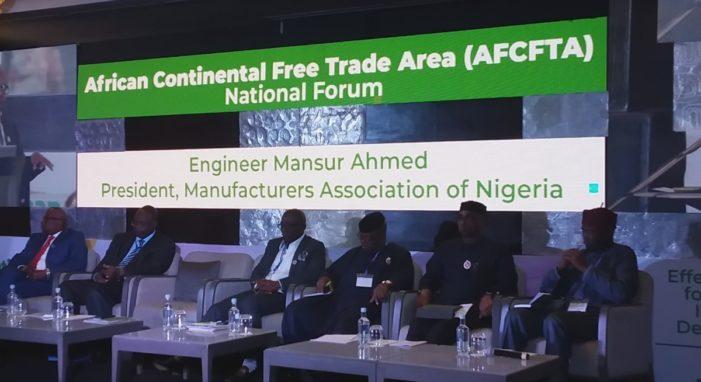 The National Association of Nigerian Traders (NANTS) has urged the Ministry of Industry, Trade and Investment to develop synopsis of negotiated items on African Continental Free Trade Agreement (AfCFTA) for proper implementation.

NANTS President, Dr Ken Ukaoha,  made the call in a memo it addressed to the Minister of Industry, Trade and Investment, Otunba Adeniyi Adebayo, in Abuja.

Ukaoha commended the management of the AfCFTA, especially the preparations for implementation of the agreement under the leadership of the minister, as the Chairman of the National Action Committee (NAC).

He said that since Nigeria had successfully advanced beyond the Jan. 1, 2021 implementation take-off date, it had to start massive sensitisation and enlightenment of all actors, including the private sector and implementing agencies.

“For this reason, we request that you cause the Ministry, or the Nigeria Office for Trade Negotiations (NOTN), which has been responsible for AfCFTA negotiations so far, to develop a synthesis which summarises all items negotiated on AfCFTA.

“Such articulated documentation that captures all the thematic issues should be produced and made available to all key stakeholders.

“It would help stakeholders to have a clear and up-to-date understanding of the subject, so that they can use same to engage in a thorough and effective sensitisation of their members.”

According to him, it will enable all actors to remain on the same page in understanding responsibilities and/or actions from the various levels.

Specifically, he noted that private sector organisations would need to educate their members on key points and outcomes of the negotiations, requirements, as well as strategies, for compliance with various provisions on every thematic issue in the agreement negotiated.

Ukaoha further suggested that subject to the minister’s approval, the said document should be in a tabula form with columns, specifying but not limited to each of the subject/thematic issue, and Relevant Protocol or Annex.

According to him, it will specify Nigeria’s position canvassed, brief summary of reasons for such position (justification), final outcome/common position taken by the AfCFTA and actions to be taken on the subject.

Others include key agency or agencies responsible for implementation of the actions, expected outcomes, possible monitoring mechanism and timeline, among others.

Ukaoha appealed to the minister that the suggested synthesis should facilitate easy identification of actions, roles, tracking of impact and success stories for his report card, as the chairman of the NAC.

He said that it would help the ministry to prepare ahead of time, for the review and amendment of the AfCFTA in the next five years, pursuant to the fulfilment of Articles 28 and 29 of the Agreement.

“This benefit is in addition to the improvement of stakeholders’ knowledge-base, which is very key to proper and effective implementation of the AfCFTA.”

For emphasis, he advised that the sensitisation and awareness creation would not be only critical to the effective implementation, but fundamental to galvanising the realisation of the benefits of the agreement.

“Nigerians want to know what was negotiated on their behalf and how the implementation would be conducted.

“The required sensitisation and public awareness must, therefore, be conducted with a basic document that provides informed knowledge,” Ukaoha noted.