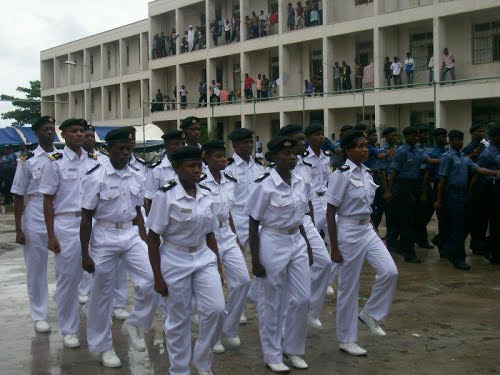 This is even as the group explained that while it backs calls for the Academy upgrade to a degree awarding institution, it’s important for the Academy to retain its status as Nigeria’s specialized training institution with a core mandate to train maritime professionals for both sea-going and onshore careers who serve the nation’s maritime, shipbuilding, port operations, offshore oil & gas, and related industries.

Disclosing this on Wednesday in Lagos during a media briefing, President of AMANO, Emmanuel Maiguwa Gankino explained that with the arrival of new equipments and an Helicopter Underwater Escape Training (HUET), the Academy is ready to award degrees.

Gankino said MAN, Oron  was first established as a Nautical college of Nigeria in 1979, specifically with a core mandate to train shipboard officers and ratings before it was upgraded to it current status

“The repositioning of the Academy in 1988 enabled the Academy to provide training for shore-based personal in the Maritime Oil and Gas industry and other specialized courses.

“Currently, the Academy is getting the attention of stakeholders to reposition it to meet the demands of our dynamic maritime industry.
” And we thank all stakeholders who have paid a keen interest towards the advancement of this institution, especially the distinguished Senator Akon Eyakenyi, who is the sponsor of this Bill under review.
“The Alumni of Maritime Academy of Nigeria Oron (AMANO) has graciously submitted a memorandum to both House of Representatives in the 8th Assembly and The Senate in the current 9th Assembly with its views as follows:
“Maritime education is a specialised training endeavour that provides specific expertise and proficiency for the professional licensing and competency required to manage the industry effectively.
” Maritime Academy of Nigeria Oron is presently the foremost specialised institution in Nigeria that provides the full range of professional education and training in accordance with the International Maritime Organisation’s (IMO) requirements for the training and certification of seafarers in Nigeria.”

He however said the Alumni of the Institution supports the upgrade of the Academy to a degree-awarding institution but should retain it present status as a specialized training institution for the industry.

“The Alumni of the Maritime Academy of Nigeria, as a unified body, believes that it is time for the Federal Government to upgrade the Academy, as it did in 1988, to a degree-awarding institution.

” AMANO is of the opinion that the Academy retains its status as Nigeria’s specialize training institution with a core mandate to train maritime professionals for both sea-going and onshore careers who serve the nation’s maritime, shipbuilding, port operations, offshore oil & gas, and related industries.”

“It is to be noted that there is a global shift in the training and education of maritime professionals to a multi-functional level.

“Modern trends in technological developments and digitalization have made it imperative to train future mariners to meet the new Blue Ocean economy’s demand to operate and manage the maritime assets to achieve it.
“Through the Academy’s management, we are pleased that the Federal Government has restructured and rehabilitated the Academy from the degradation it had suffered in the past decades. In the past three years, there has been significant improvement in the infrastructure and modernization drive of the Academy.

“Equally, a commendable effort has been made to upgrade and improve the training facilities, including the acquisition of new training simulators and the new arrival of the Helicopter Underwater Escape Training (HUET) console.

” With these developments and the expected improvements in quality academic staff, the Academy is in every respect ready to award degrees.”
“AMANO does not consider it necessary to convert the Academy into a conventional university. We are of the opinion that it should retain its name as Maritime Academy of Nigeria, Oron, but upgraded to a degree-awarding institution, similar to the following few examples of schools we (Nigerians) Patronize:
“Massachusetts Maritime Academy – United States; Arab Academy of Science, Technology and Maritime Transport – Egypt; Philippines Merchant Marine Academy – Philippines; Maine Maritime Academy – United States.
“Most of these institutions are degree-awarding but did not change their names to university due to their core and peculiar mandates.
“As a degree-awarding maritime Academy, restructured and strengthened, equipped with state-of-the-art training facilities, and adequately funded, the Academy can further expand its curriculum to cover courses covering the maritime and offshore oil and gas industries. In addition, it can offer parallel degree and professional license courses for different streams of students based on their individual career choices. This is the practice in many parts of the world.

“In conclusion, AMANO wishes to resonate a clarion call to other stakeholders to support the Maritime Academy of Nigeria, Oron in developing its capacity to provide quality training and education not just for the Nigerian maritime industry professional but to other parts of the world.”