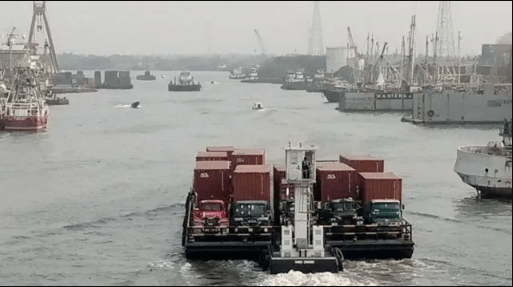 The unified body of maritime truck operators, Council of Maritime Truck Unions and Associations (COMTUA) has accused barge operators of taking advantage of the state of the port access roads to unilaterally increase the cost of moving consignments from the ports in Lagos by 54 percent.

Recall that the newly introduced electronic Call-Up system has collapsed owing to alleged hijack by cabals who do not want the system to thrive on order to be able to milk truck owners and drivers.

The truckers lamented that since the return of  long queues along the  corridors, following the inability of the Nigerian Ports Authority (NPA) to sustain the E-call Up system which in turn has led to  the poor flow of vehicular movement inward and outward the seaports in the last two months, bargers are smiling to the banks over the inefficiency of NPA and Truck Transit Park (TTP) operators.

President of COMTUA, Olaleye Thompson, lamented that the poorly managed ETO system by the NPA has led to hike in barges operations, adding that cost of moving cargoes from the seaports to Mile 2 via the waterways has increased by 54 percent.

His words, “Before now, those who were moving cargoes through barges were paying N220 thousand naira but when they saw the situation of the road, as I am talking to you today, barge is N340 thousand naira

“They noticed that the road is zero, so you don’t have a choice if you want to move your consignment early, you have to come to them.

“It has given them the monopoly because they know that you cannot get it done on the road,you have to come back to them.

“It is the common masses in the market that suffer the whole thing. Even if they move containers for one million, it is the populace that suffers it at the long run because whatever you buy, you put it on the prices. So, government needs to do something because it is like punishing the citizens,” he lamented.

Over 90 million Nigerians have no access to electricity — World Bank