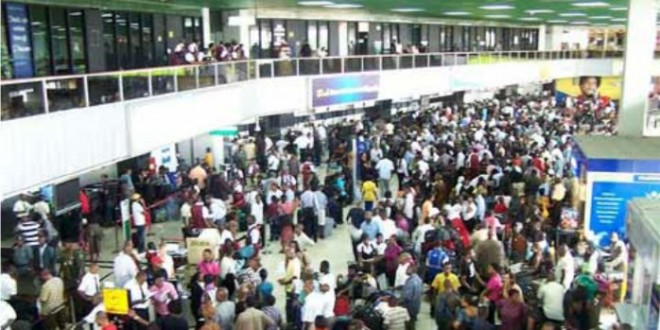 As Nigerians groan over scarcity of Premium Motor Spirit (PMS), also known as Petrol, the aviation industry is also hit by scarcity of  aviation fuel called Jet A1, in the domestic market.

The scarcity, has however, made the price of Jet A1, skyrocketed from N426 last week to N440 per litre in most airports across the country.

The scarcity led to delay of flight between four to eight hours, thereby, making air travel across the country, strenuous and cumbersome.

Recall that price of aviation fuel spike, for sometime now. The price has moved from N400 two weeks ago to N426 last week and presently N440.

It was also gathered that the scarcity has again led to flight delays and possible cancellations in the domestic scene.

A source close to one of the operating airlines said on Wednesday that fuel marketers now ration the product to airlines.

On Tuesday, virtually all the domestic airlines had to delay flights for several hours due to the scarcity of the product.

For instance, Dana Air and Azman Airlines had to delay flights for several hours at the Lagos Airport to Abuja and Kano, respectively due to the unavailability of the product.

One of the domestic airlines on Tuesday delayed its flight out of Lagos for over seven hours, while another had more than four hours delay at the same airport.

Aviation stakeholders, however, said, fuel contributes about 40% to 50% of airlines operational cost.

Speaking, the Secretary General, Aviation Round Table Initiative (ARTI), Capt. John Ojikutu (rtd), said, outside the government costs from subsidies, there are additional costs from the marketers which include local transportation from Apapa to the airport.

Other costs, that trigger hike in aviation fuel, according to him, are demurrage on the number of waiting days before discharge into the magazines at the airport fuel depots.

He said, “Fuel is one of the factors which contributes about 40% to 50% of the operational costs.

” Outside the government costs from subsidies, there are additional costs from the marketers which include local transportation from Apapa to the airport and demurrage on the number of waiting days before discharge into the magazines at the airport fuel depots.

“These additional costs can be removed, but, over the years, it has become very impossible because some big heads are benefiting because of the deliberate neglect of the repairs of the pipelines that can supply  fuel directly from Ejigbo to the airport.

“The pipelines got ruptured since 1992, and, I have suggested the repair by the Nigerian National Petroleum Corporation (NNPC), in cooperation with the marketers or the marketers with the airlines or given out, as concession for a private company.”

Ojikutu, said, the repairs of the pipelines can reduce the added costs by about 20% or more if truck transportation and demurrage are removed.

“This suggestion, has been directed to the office of the National Security Adviser in 2010. The repairs can reduce the added costs by about 20% or more if truck transportation and demurrage are removed.

“The suggestion, has been sent to the NNPC and the NASS. Nothing has come out of it because as I was told in 2010.

” The security implications of having hundreds of tankers parked at the depot area is a source of concern. The area can easily attract moles or insiders threats who could use the tankers as sources of weapons of attack on the airport, a target of national economic importance,” he warned