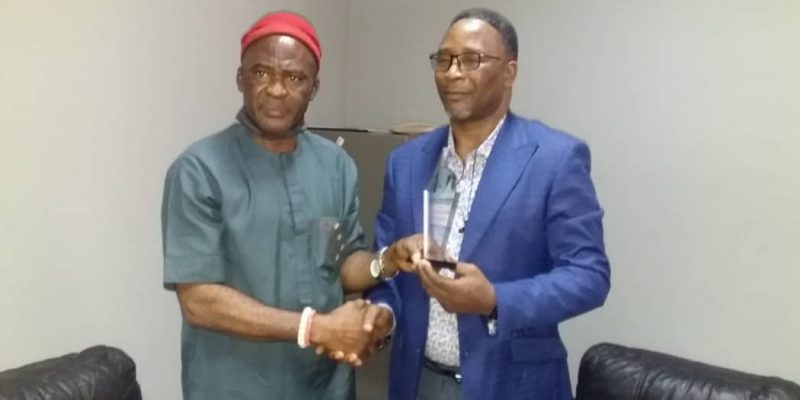 Save Nigeria Freight Forwarders Importers and Exporter Coalition (SNFFIEC), yesterday honoured the  Federal Inland Revenue Service Apapa, for its various efforts at improving the process of tax administration and timely issuance of tax clearance where there are no outstanding issues and other related operations in the maritime industry.The National Coordinator, SNFFIEC, Chief Osita Chukwu, who led the group in presentation of the Gold award of excellence to the agency, said that Apapa office was particularly selected following a thorough screening of the best six performing agencies in the sector.

He added that FIRS emerged winner after a careful selection process, having observed the operations of the Service in the sector over a period of time.

Chief Osita Chukwu noted that the open door policy of the Service and the extreme loyalty of the staff are some of the key indicators that made the office stand out, among other criteria.

He urged the Service to continue in its excellent performance, while stating that the performance of the staff could fetch them higher appointments in the future, if they do not relent in their efficient and timely service delivery.

Receiving the Gold award, the Tax Controller, Apapa MSTO, Mr. Pukat Shehu  thanked the Association for deeming it fit to award the Service for its good work, while stating that the Service would not rest on her oars but said the  award would spur the agency to do more.

Speaking further, Pukat stated that the cooperation and resolute determination of the hardworking members of staff of the office are the reason for these outstanding achievements over the years.

“On behalf of FIRS Apapa MSTO, we are happy to receive this honour and award, which will spur us to do more.

“To whom much is given, much is expected, the award is a call to do more hence we won’t rest on our oars. This award is one of it’s kind, as we have received series of commendations from the Executive Chairman and Management of the Service.

“Just as reiterated every player is very important and critical on the field, we see ourselves as a family and formidable team, so I dedicate this award to God Almighty and the hardworking staff for for this great feat and pray that this will spur us to do more” he said.

Reacting to questions regarding  the perception of an average player in the sector to payment of taxes, the Controller informed that though some of the companies and agencies are up and doing, he however said there are still rooms for improvement, this is even as he acknowledged and commended those who pay their taxes without enforcement.

According to him, “Different people have different perceptions and attitudes towards tax payment. There are some that are ready and willing to pay as and when due without anyone asking them, nevertheless, there are those you need to pursue to make payment.

“In this sector where we operate,we have seen very huge sum of money coming into account of people but when you ask for taxes, the story changes and you begin to hear story or that story: it is not our money, it is the money someone gave us to clear goods and container for them

” Actually, if the records are speaking for themselves, we will not query anyone, but in a situation where people are hiding and cutting corners that’s what calls for concerns.

“The Maritime companies are doing well, but there is still room for improvement, because the quantum of revenue generated from this sector is enormous. Just imagine if we did not have ports anywhere or that the Lagos port is the only port that we have in Nigeria.”

“The port is one of the major sources of revenue for the country  and the people that are actively involved are the freight forwarders and importers so, if we can get like 80% of compliance, I think we will be happy to say we are moving the non oil sector forward,” he submitted.