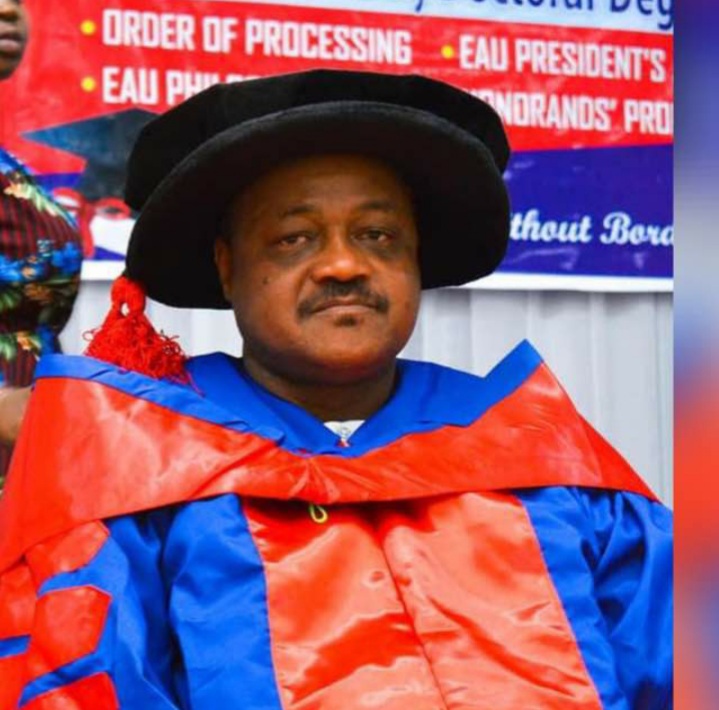 Nigerian Freight forwarders have fecilitated with the Chairman, Council  for the Regulation of Freight Forwarding Practice in Nigeria (CRFFN), Alhaji Tsanni Abubakar,  over his conferment with  honorary degree by the European American University.
The CRFFN High Chief was last week Saturday honoured with the prestigious Honorary Doctorate Degree of Science (D.Sc) Honoris Causa in Leadership and Corporate Governance at the University’ campus last week.
Leading the pack of freight forwarders who were celebrating the CRFFN High Chief , Miftahu Ya’u, the Chairman and Chief Executive Officer of Khair Worldwide Enterprises Limited, Kano, lauded the good virtues and sterling qualities of Alhaji Abubakar whom he said was eminently qualified for the honour.
Ya’u declared that he was not surprised at the latest academic accolade bestowed on the CRFFN Chairman,given his track records in the academics, military and politics.
“Alhaji Abubakar is a man of many parts.
“He has excellent track records  in the military, politics and corporate governance.
“He is a philanthropist and welfarist who has impacted so many lives” Ya’u declared.
He expressed his desire that the latest accomplishment by Alhaji Abubakar would further spur him to a greater height in his service to humanity.
“I can only wish him well and urge him to put in more efforts in his service to his father land.”
“Because this academic honour is a call to more service” Ya’u noted.
In conferring the honorary Degree on Alhaji Abubakar, the European America University Commonwealth Dominica noted his sterling performances in the military, politics and corporate governance.
The institution also noted his philanthropic activities and welfarist gestures to the needy for which the University said the CRFFN high Chief was recognised and honoured.
Alhaji Abubakar had his primary education at Tsanni, his Secondary education at Batagarawa and tertiary education at both the Katsina Polytechnic where he obtained Diploma in Public and Private Law and Bayero University where he had Advanced Diploma in Legal Studies and Degree Certificate in Information Science/ Sociology.
He was a counter intelligence operative officer with the Nigeria Air Force Headquarters, Abuja.
He holds chieftancy titles as Mabudi Borgu Kingdom, Niger State and Oke-Osisi1 of Obiekela autonomous community of Isiala- Ngwa, Abia state