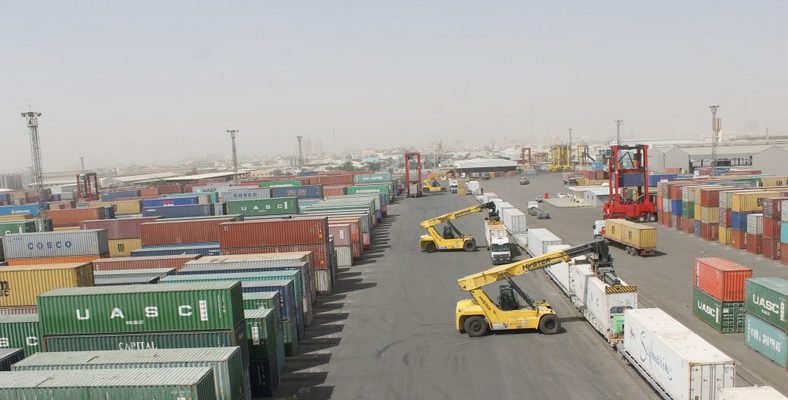 Abiola Seun The Federal Ministry of Transportation, on Tuesday, said efforts are in top gear to designate Inland Dryports (IDPs), across the country as port of origin and destination for cargoes destined for the hinterland.This was disclosed on Tuesday in Lagos by the Executive Secretary of the Nigerian Shippers Council (NSC), Honourable Emmanuel Jime, during the Launching of operational manual for Inland Dryports in Nigeria.Recall that inland Dryport projects were conceived as part of the federal government’s reform programme in the transportation sector to promote efficient transportation, enhance efficiency at our ports, to engender trade facilitation and bring cargoes closer to importers in the hinterland.Jime said, “The Federal Ministry of Transportation has started moves to designate all Inland Dry Ports in Nigeria as ports of destination and ports of origin to enable them function exactly the same way a seaport will function.“In addition to this, all agencies of government, as present inside the seaports will be present inside the Inland Dry Ports. As a matter of fact, we expect the Inland Dry Ports to be more efficient than the seaports because we are learning from the mistakes made at the seaports inorder not to replicate same at the dry ports.”“As you are aware, the council is the supervising and implementing agency of the Dry Port projects in Nigeria, consequently, the Federal Executive Council granted approval for the establishment of Inland Dry Ports in March, 2006 at six locations across the Country.The Dryports are, Isiala- Ngwa- Abia State; Erunmu Ibadan – Oyo State; Heipang Jos – Plateau State; Funtua- Katsina State; Maiduguri – Borno State and Dala, Kano State which is to be commissioned very soon. According to him, the dryports project are being developed through Public Private Partnerships (PPPs) using the Build, Own, Operate and Transfer (BOOT) Model.He said, “The strategic importance of producing the manual which articulates the step-by-step procedure for receiving, storing, handling and delivery of cargoes as well as highlighting the operations, the responsibilities of agencies and timelines for discharging such tasks is sine- quanon.”“This operational manual which has been launched in Kano on 21st July, 2022 will be launch in Port-Harcourt on the 9th August, 2022. The Manual provides a detailed processes and procedures for the main activities of the Inland Dryports.“The operators and the regulators are compelled to abide with the operational processes as contained in the Manual. Specifically, the Manual describes functions and activities of the Dryports specifies layout designs; outlines the activities that are to be performed at the Dryport, laying down the sequence of operations.”He stated further that the operational manual was created to ensure standard quality control in dry port operations.Jime stated, “this operational manual address dryport operations procedures as it relates to export and import activities; align Dryport operations to international best practices and ensure standard quality control in dry port operations.“The Manual is based on best international practice adapted to suite Nigerian context. Indeed each dry port will have its owned specialties, organizational implementation, layout constraints, and services offered and would therefore amend aspect of the manual in a case-by-case basis.“It may be pertinent to state that this Manual would be use as a measure of performance by the regulator (in this case, the Nigerian Shippers Council) and will be subjected to future review to be in tandem with obtainable best practices, upon agreement of the two parties (the operator and regulator).“The launching of the manual marks yet another milestone in the successful development and operation of the IDP projects in Nigeria.”Speaking earlier, the Minister of Transportation, Alhaji Mu’azu Jaji Sambo explained that the Inland Dry Port projects was conceived as part of Federal Government’s Ports reform programme designed among others to decongest the seaports, while also taking shipping and port services closer to importers and exporters in the hinterland. The Minister who was represented by the Deputy Director, Inland Container Depot, Federal Ministry of Transportation, Ewache Victor, said that the government has upgraded the Kaduna bonded terminal to a full fledge Dryport.He said, “In addition to the above six gazetted Inland Dry Ports, approval was also granted for the upgrade of Kaduna ICNL Bonded Terminal to a full-fledged Dry Port, this was on the request of the Kaduna State Government in 2008 resulting in approval by the Federal Executive Council.“In April 2018, the Kaduna Inland Dry Port was officially gazetted as a port of Origin and Final Destination, considering the level of development and the commitment of the Concessionaire to the project. Also, other Inland Dryports are currently being processed at the following locations: Elolo ICD, Kebbi State by Deltatlantic Nig. Ltd; Dagbolu ICD, Osun State by Osun State Government; Onitsha ICD, Anambra State by Sea Shipping Agency Ltd.Others are, Ibadan ICD, Oyo State by CRCC Construction Company Limited; AMES Edo ICD, Edo State by Atlantic Marine and Engineering Services Ltd; Bauchi ICD, by Bauchi State Government; Enyimba Economic City ICD, Abia State.”