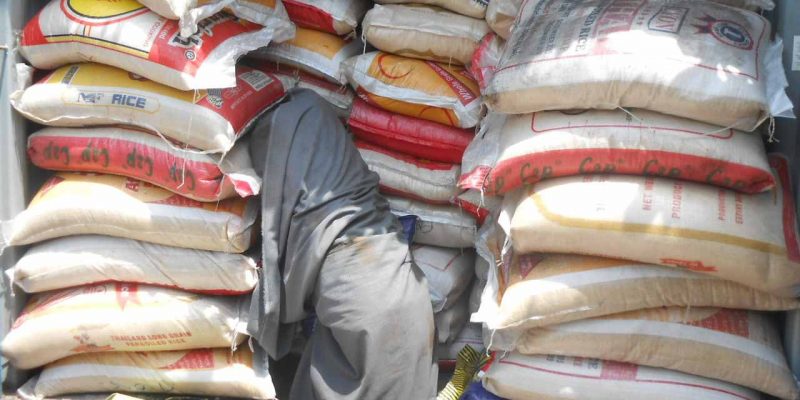 The Nigeria Customs Service (NCS) on Wednesday said the federal government has placed full ban on importation of foreign parboiled rice through the seaports.

The federal government had banned importation of rice through the land borders in 2016.

Speaking to journalists, the Customs Area Controller (CAC), PTML Command of the service, Compt. Festus Okun, said the command intercepted containers load of foreign parboiled rice which he said are not expected to be allowed into the country whether through land borders or seaports due to the ban placed on them by the federal government.

Compt. Okun who however disclosed that the command generated N224.4billion revenue from importation of vehicles and other general cargoes in 2021, said due to the ban placed on the importation through the borders, importers now falsely declare foreign rice as other consignment.

“It’s a policy by the federal government that we should encourage local production of rice and it was on that basis that importation of rice was prohibited and when they say ban through borders, it mean both land and sea borders and for our purpose here, I want to say categorically that this is a border area because goods from overseas come in through here,so it’s a border area so we have land and sea border and our is the sea border and the prohibition covers everywhere.

“One of the major instrument is that people cannot access forex going through the CBN for importation of rice so, if you don’t go through CBN, how do you source your fund to import rice and because of this,nobody declares that they are importing rice so, its false declarations and we seize on that basis.

” I will say both lands and seaports are not expected to allow importation of rice into the country.”

Speaking on revenue generated in 2021, Compt. Okun said the N224.4billion generated represent about 94 percent of the revenue target of N238.2billion.

He also said the command handled a total tonnage of 199,487 metric tons of goods exported out of the country in 2021

“The Command handled export goods with a total tonnage of about 199,487 metric tons, with a total Free on Board (FOB) value of N132.4billion.”

He further disclosed that the command seized contraband comprising of vegetable oil, pharmaceutical, vehicles worth N55million in 2021.

“The area of anti-smuggling activities, the command made some seizures in the year under review.

“The seizure comprised of four containers (3x40ft & 1x20ft) which were found to contain bags of rice, vegetable oil, drinks, vehicles, pharmaceutical product and among others with a duty paid value of N55.5million.

“The seizures were effected because the importations were done in contravention of extant laws. Vegetable oil is listed under Schedule III of the Common External Tariff (CET) Prohibition (Trade),” he said.