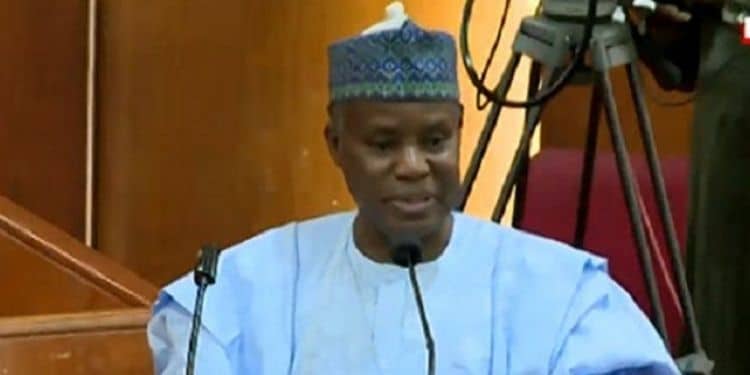 The Minister of Defence, Maj.-Gen. Bashir Magashi (rtd.), has stated that the nation’s maritime environment accounted for about 70 per cent of Federal Government revenue.

Magashi disclosed this  during the hand over  ceremony of gunboats to the Nigerian Navy by Aiteo Global Group .

He said that government was concerned about rising activities of oil thieves, illegal bunkers and pipeline vandals that constitute a great threat to the nation’s revenue generation.

The Minister assured saying, “More worrisome is the fact that sustained oil pipeline vandalism has led to environmental degradation in the Niger Delta, resulting in agitations in the region.

“This underscores the need to employ a robust protection and defensive measure that would encompass the surveillance, monitoring and prompt interdiction of potential threats,” he added.

The Nigerian Navy reportedly on Wednesday  received a total 50 assault gunboats and drones to tackle crime and criminality in the nation’s territorial waters.

Receiving the items in Port Harcourt, the Chief of Naval Staff, Vice Adm. Awwal Gambo, said the hardwares would be deployed to the creeks to fight oil theft, piracy and sea robbery.

According to him, the donation was the manifestation of months of collaboration with critical maritime stakeholders to support naval operations.

“The delivery of these platforms and assets aligns with the provisions of the Nigerian Navy 2021-2030 strategic plans on inter-agency and sub-regional cooperation.

“This is a milestone in our collaborative engagement with corporate maritime stakeholders to rid the nation’s maritime environment of criminal elements and economic saboteurs.

Gambo commended Aiteo for the donations and sought support of other corporate organisations, to enable the Navy to deploy more gunboats and halt the growing criminal activities in Nembe Creek Trunkline area of Bayelsa.

The Chief of Defence Staff, Gen. Lucky Iraboh, said the new platforms would be deployed to complement other internal security operations across the country.

The defence Chief gave assurance that the boats would be used for its set objectives of securing lives and property, including the nation’s oil and gas installations.

On his part, Gov. Nyesom Wike of Rivers, represented by the Secretary to the State Government, Dr. Tammy Danagogo, thanked Aiteo for donating the equipment.

“Interestingly, the state government had also donated gunboats, patrol vehicles and other assets to security agencies as part of commitment to protecting lives and property in the state.

“We also initiated a current security summit where we engaged with the military and security agencies to map out strategies to combat crime in Rivers,” he noted.

Lagos State resolves to boost maritime opportunities in the state