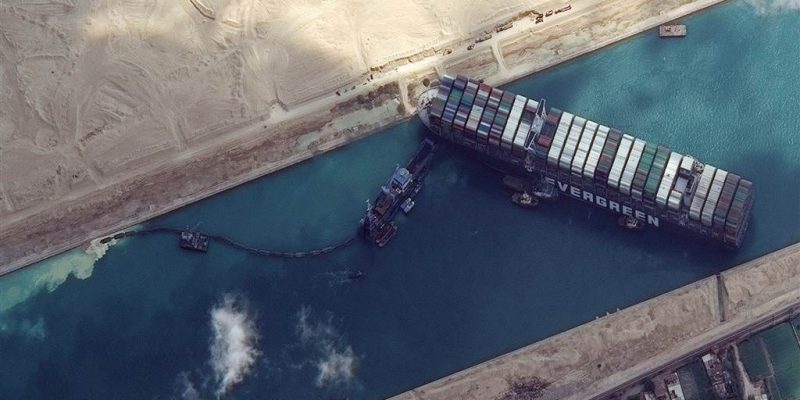 As negotiations drag on between the Suez Canal Authority and the owners, operators and insurers of the boxship Ever Given, charterer Evergreen is contemplating ways to offload the cargo for onward transport by other means.
Ever Given has been stranded in the Great Bitter Lake for inspections and legal maneuvers since she was removed from the southern end of the Suez Canal on March 29.
After unsuccessful negotiations with owner Shoei Kisen Kaisha, the Suez Canal Authority obtained a court order to seize Ever Given on April 13, formalizing its promise to hold the ship until a damage claim totaling roughly $1 billion is paid. But according to the court, the exact figure is $916 million.

The size of the demand and the seizure are both unusual. In the event of a casualty, the insurer or owner typically posts a bond with local authorities in exchange for permission for the ship to continue its commercial voyage.

The affected parties then negotiate over financial compensation, without interfering further with the crew or the cargo interests.

In a statement, Evergreen said that the SCA’s demand is unjustified, noting an unusual request for $300 million for “loss of reputation” and another $300 million for a “salvage bonus.” Independent observers suggest that the measurable damages to SCA in lost revenue and salvage costs are likely under $200 million.

Meanwhile, the vessel’s crew are stranded on board, and they have reportedly been denied permission to disembark for a crew change or for shore leave.

The owners of Ever Given’s 18,000 TEU worth of cargo will have to pay a general average bond to get their goods back, but those goods cannot be delivered until Ever Given is released – or another solution is found.
An individual involved in the process told the Wall Street Journal that Evergreen is now looking at the “prospect of moving the containers to other ships and delivering them to the clients in Europe.
” That could involve chartering empty vessels to make special-purpose voyages to pick up the cargo or buying empty slots on other container ships operating on routes to Europe.
“Either transfer option would require Ever Given to berth at a terminal equipped with STS cranes large enough to handle her extra-tall, extra-wide stacks.

“The seizure of the Ever Given and compensation demand for salvage and other expenses by Egypt’s canal authority escalates the complexity and cost for the numerous cargo owners with property in transit aboard the vessel.