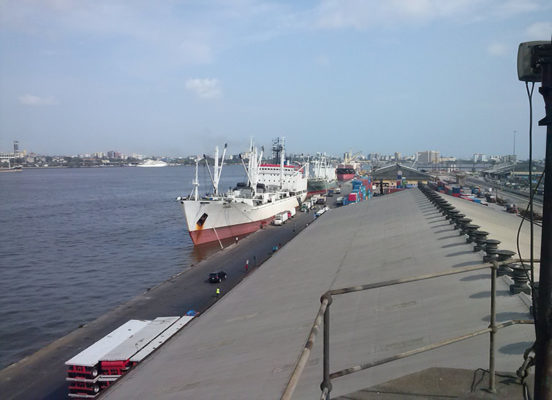 Port concessionaire, ENL Consortium on Wednesday ,  expressed worries over Federal Government’s move to construct rail tracks along the  quay apron , saying the project if carried out, will affect the storage space in the terminal.

The terminal operator is the official owners of terminal C and D of the Lagos Ports Complex (LPC).

Speaking during a working visit by members of Nigerian Port Process Manual (NPPM), Implementation Committee , Assistant General Manager, ENL Consortium, Mr. Abiodun Marcus reiterated that ENL had appealed to the management of the Nigerian Ports Authority (NPA) on the negative effect of the project in the terminal

He added that the government has turned deaf ears to all the entreaties of the concessionaires.

Marcus further decried government flip flop policies as another constraints affecting its operations noting that ban on rice, fertilizer, sugar and other commodities has negatively crashed revenue generation of the terminal operator.

The AGM added that epileptic power supply to the facility is another drain pipe for the revenue of the terminal.

According to him, traffic situation in Apapa community has not encouraged shipping and port businesses to thrive but maintained that with the NPPM Implementation Committee in place, the tendency for such issues would be resolved in a short period.

He also explained that despite the numerous challenges faced by the concessionaire, taxes and levies were paid as at when due to the federal government from inception of the port concession, adding that workers salaries were also settled as at when due.

The AGM also frowned at delays on the  importation of spare parts  for the maintenance and replacement of equipment at the terminal ; which in turn affects operations due to some policies established by Central Bank of Nigeria (CBN).

Speaking earlier, Coordinator, NPPM, Implementation Committee, Mr. Moses Fadipe assured the concessionaire of government support to assist in addressing some of the challenges.

Fadipe promised to consult management of the Nigerian Railway Corporation to gather first hand information about  the construction of new rail tracks at the quay apron at the terminal.

He urged the concessionaire to share vital information with the NPPM Implementation Committee, noting that it would go a long way in resolving most of challenges raised.

“Our problems are compounded by government policies because they are not regular and consistent.