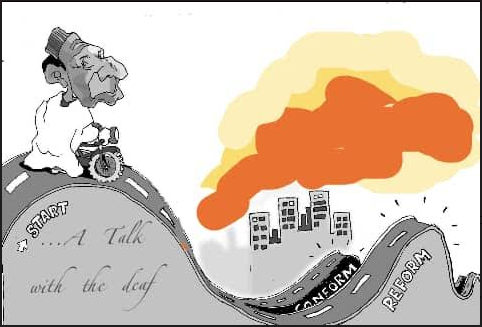 Protest, which is a form of civil disobedience, is always the last resort used all over the world, to force the hands of government, often the recalcitrant ones, to do the biddings of the people.

It is often resorted to by the people to bring to the notice and hearing of governments some of the ills of the society.

Such ills and desires of the people which the Government of the day often turns deaf ears to or pretends not to notice.

This form of civil disobedience has brought about change of governments if it is sustained to a level that it will become a mass movement.

Its extreme form is revolution.

Nigeria witnessed such sustained protest that was novel in the history of civil disobedience in the country.

Hashtagged Endsars, the protest was unique from those earlier witnessed in the country because it was sustained by the use of social media.

Nigerian youths, mobilised by the use of social media, embarked on one of the most peaceful, organised and sophisticated mass movement that blazed through the country like a wildfire and gained widest support both locally and internationally.

The protest caught the Nigerian government napping as it erroneously thought it was one of those “noise made by the rabble-rousers that will soon fade away”.

But how wrong were the Nigerian leaders and politicians who were overwhelmed by the sheer finesse with which the protest was carried out before it was unfortunately hijacked by hoodlums.

It would be an understatement to say we endorse the #ENDSARS protest just like all the people who have come to acknowledge its merits.

We must however be quick to add that we vehemently and unequivocally condemn, in an unmistakable strongest terms, the hijack of the otherwise peaceful protest by hoodlums who were allegedly sponsored to discredit the noble objective of the struggle.

The wanton destruction of public and private property is highly condemnable.

As pointed out during the Sunday October 25, 2020 inspection by Governors, Ministers, Lawmakers from the South Western part of the country, destruction in a war situation would not be more than what was recorded in Lagos.

According to the Speaker, House of Representatives, Femi Gbajabiamila, the State Governor  Babajide Sanwo-Olu hinted that reconstruction of devastated Lagos would run into trillions of Naira.

However, beyond the carnage and unrestrained acts of criminality which the protest was later made to degenerate into as a result of the criminal interference of the hoodlums, the #ENDSARS protest has achieved what its sponsors and organisers had intended despite the attempt to criminalise the noble cause.

“You have spoken and we have heard you loud and clear”,
President Muhammad Buhari said in his speech to the protesters.

To us, this was a victory for the organisers as such acquiescence to their wish could not have been easily given, under normal circumstances.

We recall that in 2017, the #ENDSARS protest was first organised to bring the issue of police brutality to the attention of government without much success.

What they got was a cosmetic reform purportedly carried out by the police authority. But that didn’t stop the heinous crimes being perpetrated by this tactical arm of the police.

But with the social media put to effective use, the 2020 version of the #ENDSARS protest was remarkable.

Not only was the five-for-five demands of the protesters acceded to, including the scrapping of the dreaded SARS, it has other concomitant effects on governance.

First, the protest shows that power belongs to the people.

Second, the protest laid bare the rot in governance with such clarity and poignancy that embarrassed the government.

For the first time, even Nigerian political leaders unanimously agreed on the need to firm up the act of governance.

Beyond the unintended discovery of scores of warehouses where Covid-19 palliatives meant for the impoverished masses were found to be hoarded and looted, which clearly signposts lack of empathy on the part of our leaders, the protest has also brought up a rude re-awakening in the consciousness of our political leaders.

This week Sunday, October 25, 2020, all the South-West governors met at the Lagos State house, Marina, to appraise the issues thrown up by the protesters.

We hope their counterparts from other geo-political zones of the country will take a cue from this to reset their act of governance to the well-being of their subjects.

The issues they have initially feigned ignorance of.

The members of the National Assembly, most of whom became jittery over the protests, have pledged their readiness to provide appropriate legal framework that will legitimise the demands of the protesters.

Femi Gbajabiamila, the Speaker of the Federal House of Representatives, declared in his address at the plenary during the heat of the protest.

These and other concessions made by the National Assembly were part of the gains of the protest, the issues that were hitherto ignored by the political leaders who were playing an ostrich game with the yearnings of the people.

The Federal Government, apparently rattled by the protest, has also promised to carry out far reaching reforms in the police.

Vice president Yemi Osinbajo not only apologised for long years of government neglect of the issues raised by the protesters, but also directed the states governors to set in motion judicial machinery to ensure justice is done, to which substantial compliance has been achieved.

In as much as all the wishes and desires of the protesters may not have been fully met, we consider the level of government concessions in this regards as a victory for the Nigerian youths.

They have successfully used legitimate civil disobedience to talk to the government which had in the past ignored the issues raised but  to which  it has been forced to  listen and acted.

The politicians, by virtue of this  protest, will now think twice before they attempt to take the people for granted.

The government will have a rethink before it takes the people’s welfare for granted.

We sympathise with all the victims of the protest.

To the dead, we pray for the repose of their souls and take solace in the fact that their death will not be in vain.

To the injured, we pray for their speedy recovery.

To those who lost their property to the looting hoodlums, we pray that God will replace their losses in hundred folds.

We call on all to stop the crisis while governments get to work to right the wrongs.