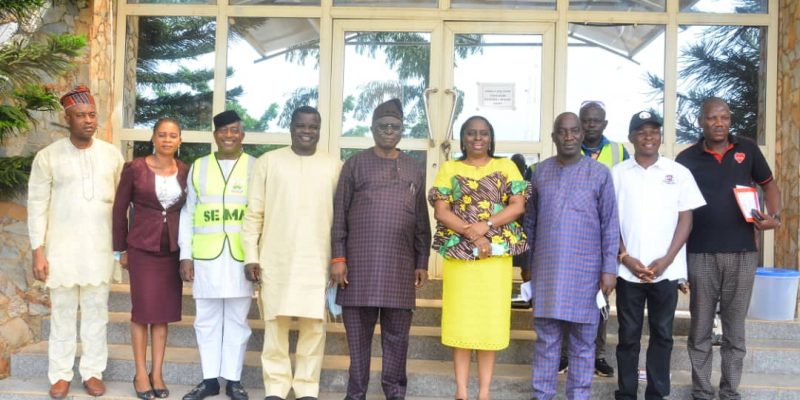 The Ekiti State Government has taken delivery of relief materials donated by the Nigeria Maritime Administration and Safety Agency (NIMASA) to be distributed to disaster victims in the state.

The Deputy Governor, Otunba Bisi Egbeyemi, who spoke during a courtesy visit to his office on Tuesday by the management teams of NIMASA and the State Emergency Management Agency (SEMA) said the state government had assisted disaster victims within the limits of its resources.

According to a statement by the Special Assistant (Media) to the Deputy Governor, Odunayo Ogunmola, the NIMASA team was led by the agency’s Director General, Dr. Bashir Jamoh, who was represented by the Director of Administration and Human Resources, Mrs. Ronke Thomas.

The relief materials were officially handed over to the state government at the NEMA office at Ajebamidele area of Ado Ekiti, the state capital.

Expressing delight with the donation of the relief materials by NIMASA, the Deputy Governor hailed the agency’s gesture noting that the materials would go along way in cushioning the effects of disasters on the affected victims.

The Deputy Governor assured that the items would be distributed equitably and accordingly and that government would ensure that the aims and objectives of the exercise was achieved.

Otunba Egbeyemi said: “I am delighted to express profound gratitude on behalf of the Ekiti State Government and the entire people of the state for your thoughtfulness in deeming it fit to provide these relief items for the victims of various disasters in the state especially, the Internally Displaced Persons.”

Speaking earlier, NIMASA boss, Dr. Jamoh, explained that the donation of the relief materials was part of the agency’s Corporate Social Responsibility (CSR) gestures most especially to give assistance to Nigerians suffering the pangs of natural disasters and insecurity.

The NIMASA chief added that the exercise was being replicated in the 36 states of the federation and the Federal Capital Territory (FCT) to identify with Nigerians in distress and give succour to them.

He said: “We are assisting people displaced by flood, insecurity and other forms of natural disasters. We empathise with what Nigerians are going through and that is why we are embarking on this gigantic project.”

In his remarks, Ekiti SEMA Board Chairman, Captain Adebomi, said the state would need more relief materials from well-meaning agencies and corporate bodies noting that the state has over 5,000 Internally Displaced Persons.

While appreciating NIMASA for the donation, the SEMA boss disclosed that Governor Kayode Fayemi has assisted the agency in giving help to disaster victims since the commencement of his administration urging other stakeholders to complement his efforts