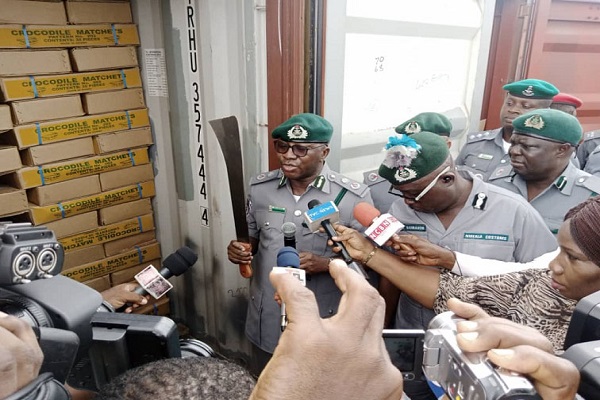 The Nigeria Customs Service (NCS), Tin Can Island Port Command, has said that its officials seized eight containers of crocodile-branded machetes imported from Ghana and other prohibited goods valued at N1.05billion.

Area Controller, Adekunle Oloyede said the 206,000 machetes were seized due to security issues in the country,  adding that there was no End Users Certificate from the office of the National Security Adviser for the importation of such items.

Other seized items were Indian hemp concealed in two units of Ridgeline trucks and two units of Toyota corolla vehicles, 640 bales of used clothes, 236,500 pieces of used shoes, 62,500 pieces of new lady’s shoes, 1,670,400 pieces of Chloroquine injections, and 1,814,400 pieces Novalgen injection. Others were 48,850 rolls of cigarettes, 23,800 tins of sodium bromate and baking powder.

According to him, the command generated N135.44billion between January and March, noting that the amount was N22.7billion or 20.18 per cent above the revenue generated in 2021