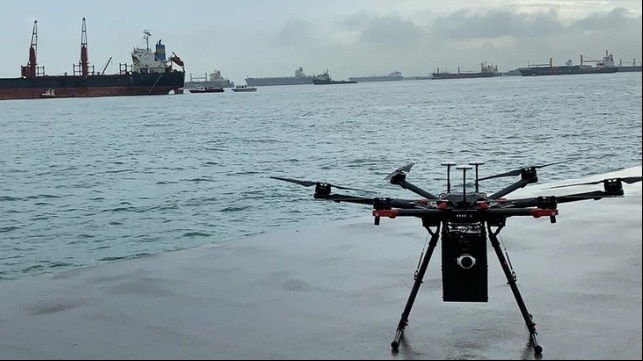 Among the range of uses being developed for drones is the opportunity to conduct ship-to-shore deliveries.

drones, founded in 2019, raised seed capital to continue the development of its system designed to carry over 200-pound payloads a distance of over 60 miles.

The shipping management company Eastern Pacific Shipping, which has been involved with the first test flights, lead this round of investment along with participation from shipowner/manager Schulte Group through its venture arm, Innoport. Other participating in the fundraising included SEEDS Capital, Entrepreneur First, Orient Ventures, Superangel, and a few Singapore-based angel investors.

“We are very excited to be able to close the round with more capital than we initially intended. This demonstrates the industry’s confidence in our capability and vision to make maritime logistics more efficient, sustainable and safe,” says Yeshwanth Reddy, co-founder of F-drones.

In December 2019, during the first test flights, they sent nearly seven pounds of spare parts and 5.5 pounds of Christmas gifts to the crew aboard an Eastern Pacific bulker anchored in Singapore harbor.

During the return flight, the drone carried fuel and fresh water samples to shore. 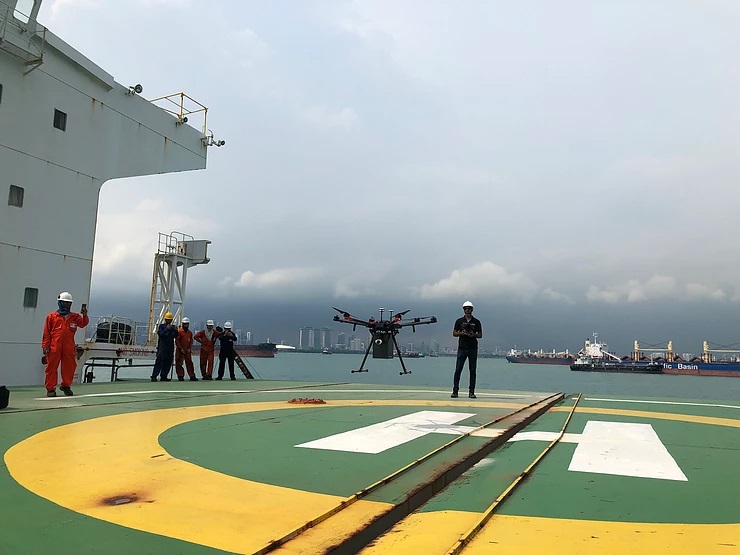 Drone completing one of the first test flights (F-drone)

“EPS is proud to lead F-drones’ first seed round. We firmly believe they will reinvent the shore-to-ship delivery process by being faster, cheaper, and cleaner than any existing model in use today,” said Gil Ofer, Special Advisor for Innovation at Eastern Pacific Shipping.

Among the other benefits of the technology, they highlighted the ability to limit direct contact which has proven so critical during the pandemic.

F-drone is using these first systems to develop its Hyperlaunch Heavy (HLH), a fully electric and autonomous proprietary drone, capable of delivering the larger 200-pound payloads. The goal is to start test flights to ships in Singapore later this year and commence commercial drone deliveries with Hyperlaunch soon after.

Among the other organizations working with F-drones are the Maritime and Port Authority and Civil Aviation Authority of Singapore in helping to develop the protocols for the service and test flights.

Among the shipping industry, Wilhelmsen, GAC Group, Hafnia, and Throme Group, have also been working with and supporting the company.