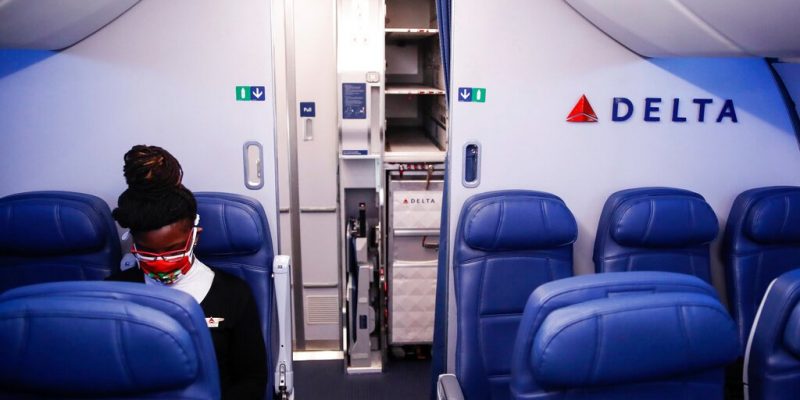 Delta Airlines said in a pair of internal memos to employees this week that it has  asked competitors to share their no-fly lists, to try to keep passengers who cause disturbances on planes from bringing their mayhem to other airlines.

Since January 1st, the Federal Aviation Administration says it has received 4,385 reports of unruly behaviour by passengers, which includes 3,199 reports of passengers “refusing to comply with the federal facemask mandate.”

The FAA has issued more than $1 million in proposed fines, but the agency does not have the authority to conduct criminal prosecutions.

Among the incidents, according to the FAA:

On a May 24th flight from New York to Orlando, a passenger was “allegedly throwing objects, including his carry-on luggage, at other passengers; refusing to stay seated; lying on the floor in the aisle, refusing to get up, and then grabbing a flight attendant by the ankles and putting his head up her skirt.”

On a May 16th flight from New York to San Francisco, a passenger was “allegedly interfering with crewmembers after failing to comply with the facemask mandate; making non-consensual physical contact with another passenger; throwing a playing card at a passenger and threatening him with physical harm; making stabbing gestures towards certain passengers; and snorting what appeared to be cocaine from a plastic bag, which the cabin crew confiscated.”

On an April 12th flight from Boston to Orlando, a passenger was “allegedly interfering with crewmembers after refusing to comply with the facemask mandate.

She also shouted obscenities at the flight crew, and intentionally bumped into a seated passenger on her way to the lavatory.
When the seated passenger objected to this behaviour, she punched the passenger in the face.”
The passengers in those incidents were referred to law enforcement and the FAA has proposed fines ranging from $29,000 to $45,000.

Delta sent its memos to employees the same day that airline industry representatives took part in an “air rage” hearing before the House Committee on Transportation & Infrastructure, asking Congress to encourage the Department of Justice to take more serious measures against unruly passengers, including possible criminal indictments. Interfering with a flight crew aboard an aeroplane is a federal crime that has a max sentence of up to 20 years in prison.