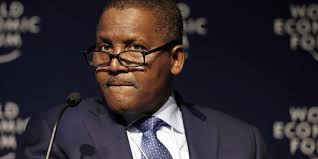 Chinazor MegboluAn indigenous conglomerate, Dangote Group, has confirmed its in talks with three oil firms from Western and Middle East countries to acquire a stake in its 650,000 barrels per day (bpd) refinery.
The Group Executive Director, Dangote Industries Limited, Mr. Devakumar Edwin, disclosed that the Nigerian National Petroleum Corporation (NNPC) had announced that it is in talks to purchase a 20 per cent minority equity stake in Dangote refinery.
He explained that the oil companies, involved in trading and crude production, are looking to secure crude supply agreements.
“The discussions between these three oil firms and Dangote Group is a similar objective pursued by NNPC.
“They are seeking to have 20 per cent minority stake in Dangote refinery as part of collaboration… so that they can sell their crude,” Edwin said.
He also noted the refinery is not looking for equity and that the firm wants to be able to secure crude from the market.
Edwin further pointed out the country recorded a loss when its biggest customer, the United States of America started producing shale oil.
He maintained that USA is now pushing into some of Nigeria’s most valued markets.
Edwin, however, posited that the refinery is slated for mechanical completion in 2021 and will be Inaugurated by January 2022.
Edwin also averred that the Dangote Refinery is expected to be Africa’s biggest oil refinery and the world’s biggest single-train facility after being completed.