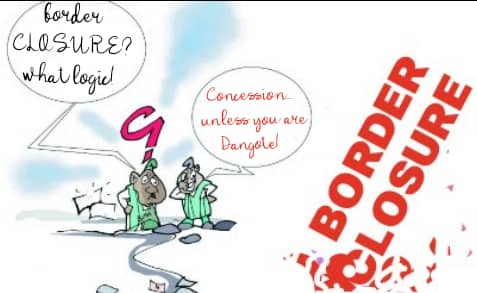 Last week, words filtered in that the Federal Government has bent backwards to grant special request for three companies to export their products through the shut Nigerian land borders.
The three special companies are Dangote Cement, BUA and an unnamed gas firm.
It could be recalled that Nigerian borders have remained shut to both the legitimate and illegitimate businesses since August 20th, 2019.
Expectedly, the government waivers to the three companies, granted since July,  elicited heightened emotion  from the business community in Nigeria, especially the legitimate importers and exporters whose businesses have been badly affected by the unending closure.
Members of the business community have justifiably cried blue murder, describing government action as undisguised favourism which confers undue advantage on the recipient companies.
We can’t agree less with the position of the aggrieved legitimate Nigerian  business owners who felt betrayed by the action of government which tends to protect and more sensitive to  the business interests of few powerful and well connected Nigerian business owners.
We have often shouted ourselves hoarse on this platform on the need to either end the  long border seige which we consider as anachronistic approach to tackling trade- related issues.
Or better still,  relax the seige to allow legitimate businesses, whose owners have suffered untold hardship, to ply their trade.
We have often argued that  legitimate business owners are not smugglers of rice or traffickers of illicit arms which the border closure meant to tackle.
The concession granted Dangote Cement and other two companies has further justified  our position on the unending border siege.
We have always held the position that the clamp down on the borders was becoming unnecessarily prolonged which has harmed legitimate businesses and did little to tame the monstrous smuggling activities that still thrive, albeit covertly.
We whimper at the reason which government gave for  granting the request for concession to these three companies.
According to Joseph Attah, the Deputy Comptroller of Customs who has the dual capacity as the spokesman for the Nigeria Customs Service and the Joint Border patrol team in charge of border closure,  the three companies were exempted “due to
one special request for some items direly needed in some West Africa countries”
We consider the reason as outlandish as it is ridiculous.
Does that means other legitimate business owners do not have one special need to export their goods to their customers in the West Africa countries?
Or genuine importers have no need or demand to satisfy in the country?
In as much we are not against the concession to these  firms, what we frown at is its restriction.
Why should the Federal Government consider only these three firms in export waivers through the borders?
Do the three companies have monopoly of the products they are exporting?
What about other Nigerian business owners involved in the same line of business as these three favoured firms?
What are the criteria used to grant them this business lifeline?
For us, what is good for the goose is good for the ganders.
Granting the waivers to the three companies has invalidated the continued siege on the borders.
If there could be a reason why Government could acceed to the request of these companies, no matter how little, it  presupposes that the continued closure of the border may have lost its relevance.
Most legitimate businesses have either gone under or suffered incalculable damages due to the unending border closure.
We believe that since government has seen reason to bend over backwards to accommodate the requests of  some of these legitimate businesses, it should go the full hog to accommodate all legitimate businesses.
If for any reason government is still fascinated by prolonged border siege, it could still tighten the noose on the operators of illicit trade as long as it wants  but should  admit all verified legitimate business owners into the category of the three lucky beneficiaries of its magnanimity.

Having closed the borders, our main concern is that the exercise is stretched too far which may result to unintended consequences  that will continue to reverberate long after the action is wound up.

The closure is gradually but steadily incapacitating legitimate trans-border businesses.

The proponents of the policy not only meant to stop smuggling of contraband items into the country, but in the process, wanted to cripple the businesses of Nigerians in the former and  informal sectors of the economy who engage in trans-border trade.

Why is border closed against this set of people? Are they part of smugglers of rice and other illicit items which government intends to stop?

Why would the owners of legitimate businesses in the country bear the wrath of government on smugglers?

Ironically, through this policy, government is inadvertently killing the very sector it ought to grow and protect.

Operators in this sector have cried out that their businesses are suffering and most of them have either gone under or  may go under due to the unintended consequences of the unending closure.

Senate kicks against concession of Customs revenue to foreign firm