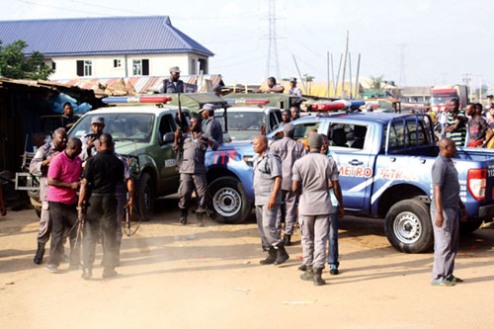 The suspension according to the circular dated March 7th, 2022, and titled, ‘Approval Of Grace Period, To Clear Backlog Of Vehicles’, begins from Tuesday, March 8th, 2022.

Recall that the policy had led to an impasse between licenced Customs Agents and the service and led to the shutdown of port activities for the past two weeks.

However, in a circular dated March 7th, 2022, with circular number, NCS/T&T/ACG/008/S.100/VOL 111, issued on Monday, the service said it has approved one month window to enable the clearing agents clear backlog of vehicles held up in the port as a result of the strike action.

The circular reads, “Sequel to the recent Customs, stakeholders town hall meeting held in Lagos on the VIN-Valuation, the comptroller general of customs (CGC), Col. Hameed Ali (rtd), having listened to public outcry, has graciously approved one month window to enable clearing the backlog of vehicles, held up in the ports as a result of the strike action.”

“Meanwhile, you are requested to ensure the uniform application of rebates for all vehicles using the correct values for your assessments. The VIN-valuation protocol is still in operation as reviews and updates are being captured in our system to reflect these adjustments.”

The circular which was signed by H.K Gummi, Assistant Comptroller General for the Deputy Director General, directed the affected area controllers to monitor the transition period and ensure manual assessments are in compliance with extant laws of the hand.

The letter said, “Area Controllers are expected to monitor this transition period and ensure manual assessments are in full compliance with extant laws. This grace period is for one month, beginning from Tuesday 8 Mar 22.

“You are to bring the contents of this circular to your Officers and the General public for their information and guidance, please.”

However, clearing agents have applauded the management of the Customs Service for suspending the controversial VIN valuation policy.

According to the President, National Council of Managing Directors of Licensed Customs Agents (NCMDLCA), Lucky Amiwero, he said total waiver should be granted clearing agents on storage and demurrage, incurred by vehicle importers during the strike period.

Amiwero, said according to section 152 of the Customs Excise and Management Act (CEMA), there should be statutory waiver on rent and demurrage by shipping and terminal operators during the protest period.

He said, “we  wish to draw the attention of the  federal government, on  the need for total waiver of rent and demurrage as a result of the protest by Licensed Customs Agents (LCA), on the implementation of VIN valuation on imported vehicles by  Nigeria Customs service .

The statutory waiver on rent and demurrage by shipping companies and terminal operators as contained in section 152 of the Customs and Excise Management Act  (CEMA) act 45 of 2004.

“The Section 152 states, when any goods are deposited in a Customs areas (Terminals) or in a government warehouse under or by virtue of any provision of this act and the board is of the opinion that having regards to all the circumstances of the case no rent  or reduced rent shall be charged.

” Therefore, it may waive or reduce any rent payable or refund the whole or any part of any rent paid under this Act. The need to comply with section 152 by waiving all the rent and demurrage associated with VIN valuation protest.

“We hereby, appeal to the government to implement the provision of section 152 by the waiver of rent and demurrage associated with delays in dispute of the implementation of VIN valuation, which is under Customs dispute as contained the statutory provision.”

Babatunde, said Customs only allowed vehicles that merited variables that were not considered in the designing of the Vin Valuation policy to exit the ports.

He said, “On demurrage and storage waiver, we have engaged Shippers Council abinitio, that we don’t know how this will tun out and how long. We asked Shippers Council to instruct Shipping Lines and Terminal Operators for waiver, so, we believe that will be activated now.”

Speaking on the VIN Valuation policy, Babatunde said, “they didn’t suspend the VIN valuation policy, what they did in response to our agitations simply put is that all those vehicles that merited variables that were not considered before in the design of the VIN, such as, accidented vehicles, which the new VIN did not recognise.”

“So, they say all those vehicles in that categories, go back, present your case in a manual process and get out of the port. That is what they have done technically,” he said.