A Saturday clash between operatives of the Nigeria Customs Service (NCS) and smugglers left one person dead and others injured in Ilaro, Yewa South Local Government Area of Ogun State.

Newsmen gathered that trouble started when the joint team of the customs officers from the Federal Operating Unit (FOU), Ikeja, Lagos; the border drill and the patrol, stormed a hideout where imported rice was stockpiled.

The clash climaxed after a boy was reportedly killed by stray bullets allegedly fired by the customs officers.

The residents of the area were said to have been infuriated by the killing of the boy, who they said was playing football at a primary school when he was hit by the bullet.

The Public Relations Officer (PRO) of Ogun 1 Area Command of the NCS, Hammed Oloyede, confirmed the incident, describing it as unfortunate.

He said “I heard about the incident, but I have not gotten detailed information of what happened. What I was briefed was that it was a joint operation that was conducted by the border drill officers and FOU.

“They made some seizure and there was an altercation between them and the smugglers. They were attacked and all they could do to disperse the smugglers proved abortive. In the process, the smugglers tried to lynch the officers. So, they have to find their way out.”

Recall that only recently, stray bullets allegedly fired by customs officers killed one and injured many during a clash with angry youths in the Ayetoro area of the state.

World must be ready for next pandemic – UN 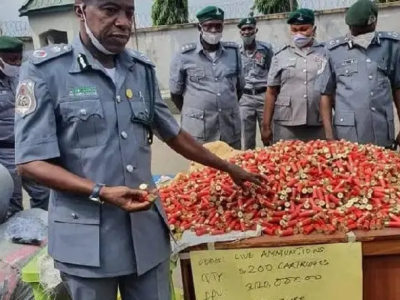