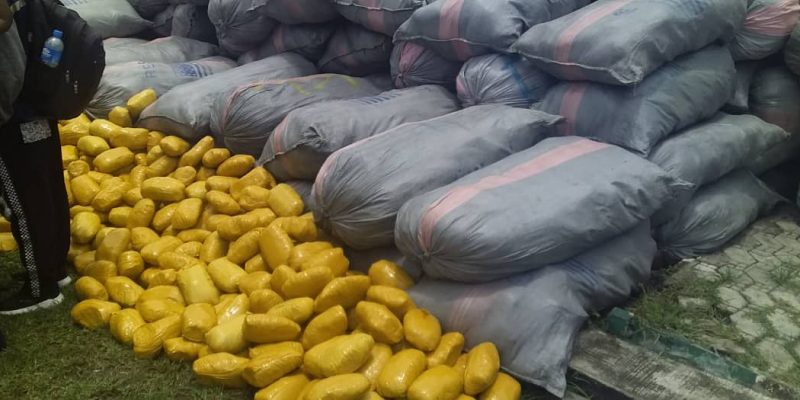 Western Marine Command of the Nigeria Customs Service (NCS) on Friday said it intercepted 232 sacks of Marijuana with an average of 46kg per sack totalling 10,672 kg.The Acting Area Controller of the command, Deputy Comptroller E. Ochiba gave the figure while handing over the contrabands to the officials of the National Drug Law Enforcement Agency (NDLEA) at the command headquarters in Lagos.

According to Comptroller Ochiba, the street value of the Marijuana is One billion, one hundred and twenty million, five hundred and sixty thousand naira (N1, 120, 560,000.00) only.

He added that on September 9, 2021, the operatives of the command while on stop and search operations along the waterways at Pashi of Yekeme axis, discovered some powdery substances suspected to be heroine concealed in a carton of Indomie noodles

He maintained that one suspect was arrested in connection with the seizure, saying that the powder substance was later sent for laboratory test analysis and was certified to be heroine.

He said, “Also, on Wednesday 15 September, 2021 at about 0020hrs, a team of patrol while on credible intelligence along Abumbum-Ojo waterways accosted and intercepted sacks suspected to contain drugs.

“The sacks were evacuated to the base and upon physical examination, they were found to contain the following drugs that have expired on the 27 April 2017 with the total value of Sixty Two Million, Two Hundred and Fifty Thousand, Seven Hundred and Ninety Four Naira (N 62,252,794.00) only.

“The issue of concem on this arrest is that these expired drugs might have found its way into our Nigerian markets if not intercepted by our operatives. The smuggler intend to replace the expired labels with new labels carrying new manufecturing and expiry date as it can be seen on the bundles of printed labels of Double Ginseng accompanying the seized consignment.

“Gentlemen of press, on Monday 20 September 2021 at about 1200hrs, our operatives, while on official patrol, intercepted Packs of drugs at Yekeme axis. Upon examination, it was found to contain 45 packs of 225mg Tramadol Hydrochloride Tablets with total value of Nine Hundred and Fifty Four Thousand, Nine Hundred and Thirty Four Naira sad Two Kobo (N954,934.02k)

“In a related development, on Friday 9 July 2021; the Nigerian Navy ship Beecroft handed over 162 xSOKg Bags of smuggled Foreign Rice intercepted at Lagos offshore, though no arrest was made as the smugglers dived into the sea on sighting the Navy Patrol Team.

“The DPV of the seizure is Five Million, One Hundred snd Fighty Four Thousand Naira (5,184,000.00) only. Let me use this medium to commend the Nigerian Navy for their support towards the antismuggling drive of the Command.

“This seizure is a symbol of cordial working relationship with Sister Agencies and also depict that the Security Agencies have no overlapping functions in the discharge of our statutory responsibilities,” he stated.