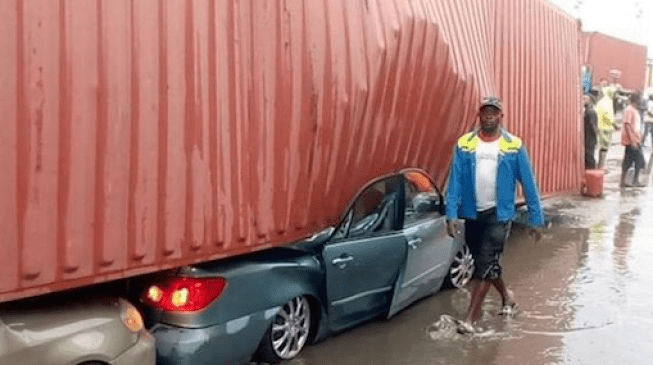 The Lagos State Police Command has arrested the owner and driver of the container that crushed to death two staff of the Federal Aviation Authority of Nigeria (FAAN) on July 26.

Chidinma Ajoku and her colleague, Chima Nnaekpe, had closed from work on the said day and boarded a commercial bus home.

Sadly, the truck driver conveying the tanker lost control and the container fell on their bus.

Chidinma and Chima died on the spot. Three others sustained injuries and were rushed to the General Hospital lsolo for treatment while the corpses of Chidinma and Chima were deposited at Yaba mortuary for post mortem examination.

The driver of the commercial bus, Daniel Okwoje, who sustained injuries, died later in the hospital.

At a press conference in the state command headquarters in Ikeja, the state Commissioner for Police, Hakeem Odumosu, disclosed that the truck driver, Okanlawon Sadiq who fled the scene of the accident, was arrested by a team of detectives from Ilasamanja division on August 7.

The police boss said the suspects will be prosecuted.

He warned operators of containers to comply with safety rules,  especially latching their containers or face the full weight of the law.