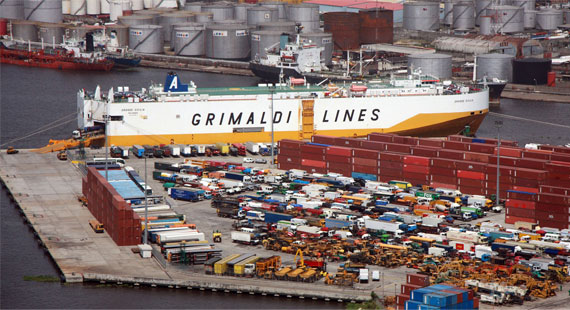 Abiola Seun
Economic activities were yesterday crippled at the Lagos seaports – Tin-Can Island and Ports and Terminal Multiservice Limited (PTML) as clearing agents protested the Vehicle Identification Number (VIN), Valuation policy recently introduced by the Nigeria Customs Service (NCS) on imported vehicles.
This protest which led to shutdown of the two seaports followed the expiration of the 72 hours strike notice issued by all registered freight forwarding associations operating at the PTML Terminal and Tin Can Island port to the Comptroller General of Customs, Col. Hameed Ali (rtd).
It was gathered that the value being issued to be paid on imported vehicles have risen by almost 300 per cent making the agents seal off the popular Car Park C at the Tin Can Island Port.
The clearing agents said despite their appeal to the Customs management to address the issue, cars are stranded at various port terminals due to failure of the new customs valuation system to generate accurate value payable on imported cars.
They complained that there was no consideration for rebate and depreciation value in the current valuation issued on imported cars.
The  Chairman, Association of Nigerian Licensed Customs Agents (ANLCA), PTML Chapter, Oluwole Obey, said up till now, the letter written to the customs CG have not been replied, neither has he reached out or given assurances to the agents.
He, however, admitted that the Customs Area Comptroller in charge of PTML Command, Festus Okun made an attempt last Thursday to pacify the freight forwarders on the new VIN Valuation platform.
According to the ANLCA Chairman, the freight forwarders are not against the introduction of the VIN Valuation, as they view it is as a noble concept that would end corruption in the system of vehicle clearance but, complained that customs failed to carry out due diligence before implementation of the policy.
Obey added that the value being issued to be paid on imported vehicles have risen by almost 300 per cent saying it would affect the end users as the prices of vehicles will skyrocket.
He further noted that Toyota Camry, which sells for N1.5million will be increased to N5million.
Also speaking, spokesman of ANLCA at PTML Chapter, Ayokunle Sulaiman confirmed that the protest would be followed by withdrawal of service at the ports.
The Task Force Chairman of ANLCA at Tin Can Port, Rilwan Amuni, corroborated that the strike action is going to be total, adding that all the freight associations are acting on same page.
Meanwhile at the Tin Can Port, one of the freight associations, National Council of Managing Directors of Licensed Customs Agents  (NCMDLCA), wrote to the Nigerian Ports Authority (NPA) informing of the planned protest.
In the letter signed by NPA’s Port Security officer, Mr Albert Onyeka, the authority said it is willing to assist in meaningfully resolving the impasse with customs in its capacity as a regulator.
It stated that NPA security department and port authority police are earnestly monitoring the protest to ensure that the port remains peaceful.