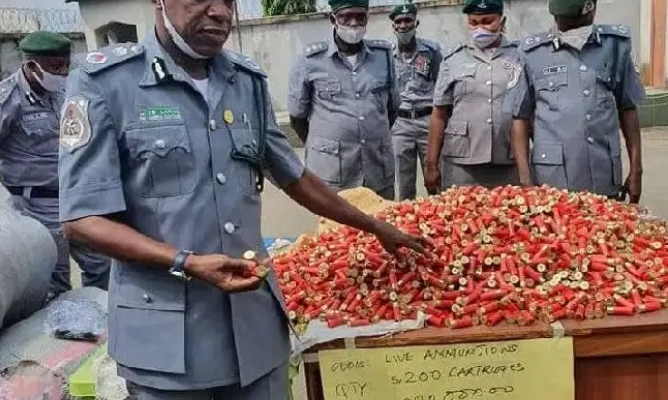 Clearing agents and Importers operating at the nation’s seaports have called on the Comptroller-General of the Nigeria Customs Service (NCS) for automatic promotion to the acting Controller, Federal Operations Unit (FOU), Zone A, AG. Compt Yahaya Usman to full-fledged Controller and officers that intercepted explosives and Indian hemp smuggled into the country from Benin Republic.

Speaking in a separate interview, the clearing agents said automatic promotion for the officers will serve as morale booster to other officers in the service.

They argued that the seizure was spectacular due to the current security threats and increased crime rates around the country, expecially in the South-East and Northern part of the country

Recall that a unit of the FOU, Zone A, last week intercepted 42 drums of calcium carbide and 2,843.6 kg of Indian Hemp smuggled into the country from Benin Republic.

The Acting Customs Area Controller of the unit, Compt. Usman Yahaya who stated that the unit acted based on credible intelligence , disclosed that the explosives were smuggled into the country through the porus Ogun State borders .

He said, “We intercepted the 42 drums of calcium carbide through intelligence gathering along Sango -Ota axis of Ogun State.

” The contrabands were in a truck and concealed with cassava tubers and flakes. They thought with the concealment, they can evade the eagle eyes of our officers,” he said.

However, speaking to Journalists, the President-General, National Association of Air Freight Forwarders and Consolidators, (NAFFAC), Prince Bakare Adeyinka, said the seizure had shown how porus the Nigerian borders in Ogun state have been despite the presence of Customs officers as well as other security agencies.

According to him, the officers who intercepted the drums of explosives should be rewarded with automatic promotion which he said will serve as morale booster for them to make more seizures.

He said, “The right thing to boost moral of officers that intercepted these drums of explosive is to compensate the officers who acheived this feat with automatic promotion. That is the way to make them do more because they could as well compromise and put the nation in a mess.”

He stated further that the promotion will made others to do more as they will understand there is dignity in doing the right thing.

“Doing this will make other officers understand that their is reward for doing the right thing but we shouldn’t also forget that the service need to up her game because the number of illegal arms in Nigeria is alarming and majority come in through the nation’s porus borders,” he said.

Also speaking, a member of the Association of Nigerian Liscenced Customs Agents (ANLCA), Chukwudi Daniels argued that hardwork should be compensated by the service.

Daniels said the current security situation in the country makes it imperative for the Customs management to boost the morale of officers who acheived feat like this.

He said, “What they acheived wasn’t a mere feat. They saved innocent souls that may have been lost if it get to the wrong hands. Though, it’s their job but when  officers acheive spectacular feat, the same way we criticise them for doing something bad is the same way they should be appreciated when they save the country of impending doom and calamities.

He stated further that automatic promotion would serve as reward for hard work.

In another separate chat, a clearing agent at the Tin Can Island port, Ebenezer Banwo, also urged the Customs CG to encourage  officers who put their lives on the line to make spectacular seizures.

Banwo stated that the officers could have allowed themselves to be compromised by allowing the drums of explosive into the country to cause havoc.

He said, “they are super officers that needed to be rewarded with automatic promotion and commendation to tell others that integrity pays.

“The officers should also be used as poster boys of the service because for the explosives to have got into the country, some officers must have compromised until the team came to intercepted it.”

He also said awarding automatic promotion to well deserved officers who made the service proud will not be the first, making reference to Deputy Comptroller, Abdullahi Kirawa, who was promoted by the former Comptroller General of the service, Abdullahi Dikko for his startling seizure of close to 10,000 bags of rice in one fell swoop in 2012 along the Seme/Badagry axis.

Lagos government to commission 15 new jetties before end of 2021