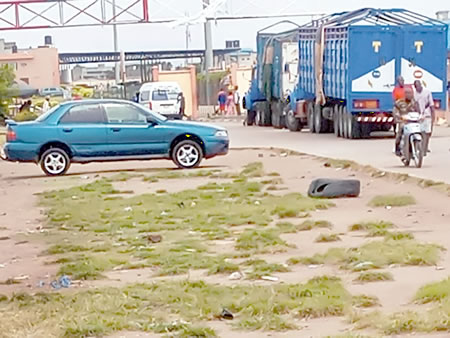 In what could be regarded as retaliation of the land border closure by the federal government, the government of Benin Republic has introduced punitive and retaliatory policies.

The retaliatory policies according to investigation have, however, led to reduction in volume of Import from Benin Republic to Nigeria by 95 Percent.

The volume of imports, it was learnt, has continued on a downward slide through July and October 2021 while the exports of Dangote products to Benin has risen by 80%. Dangote goods exported include seasonings, sugar, salt and noodles among others.

The hostile trade policy by Benin Republic has also continued to put pressure on the naira as it continues on a downward slide in the open market.

For instance, at Seme-Krake border in Badagry, the Benin’s hostile trade policy which was recently placed by the government involves a multitude of duties on goods transiting through the country from other West Africa nations into Nigeria.
The import through the Benin Republic might drop further if nothing is done by the federal government to ensure a reversal before the end of 2021, observers said.

One of such is the transit duty of about N9m imposed on goods passing through the country by road.

According to Nigerian investors, in the October Business Environment Update released by the Centre for Promotion of Private Enterprise (CPPE), it negates the trade liberalisation policy in the West African region.
Benin Republic Customs in June 2021 imposed an outrageous transit duty of an average of N9 million per truck for vehicles originating from Nigeria and crossing the Benin border to other West African countries.
The Chief Executive Officer of CPPE, Dr. Muda Yusuf, who issued the business environment update, lamented that the trend has continued to make it very difficult for companies exporting or importing by road to do so as it is essentially a blockade of movement of trucks through the Benin border.
Operators said the practice defeats the ECOWAS Trade Liberalization Scheme (ETLS) which is meant to permit the movement of goods among the member states.

The Customs Area Controller, Seme border, Bello Jibo, revealed that despite the unfriendly economic policies imposed on goods transiting through the Benin Republic by the same Benin authority, the command was able to collect the sum of N830,596,352 only as revenue from January to September 2021.

Jibo explained that, without any information, the Benin Republic in July, 2021 mandated that some duties and levies be collected on goods transiting through their country.

He said under exports, the command processed and exited export trade volume of 273,117 metric tons with a Free Onboard (FOB) value of N17.698 billion.

“The Nigerian Export Supervision Scheme (NESS) value stood at N88.875m from January to date. In addition to that, the ECOWAS Trade Liberalisation Scheme (ETLS) Unit treated 1587 trucks of goods under the scheme.