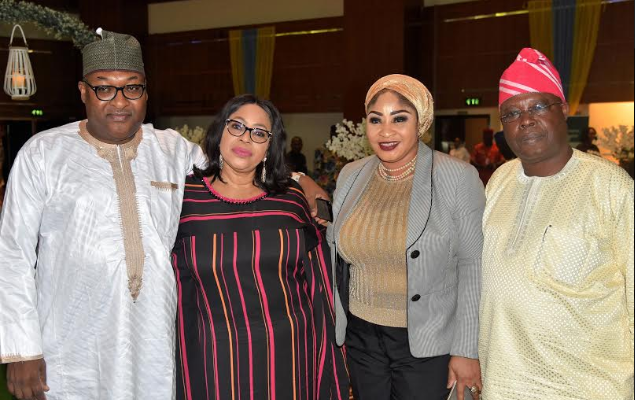 The event, which was held at the headquarters of the council, acknowledged the immense contributions of the past executive secretaries to the development and sustenance of the association.

While delivering a keynote address at the Silver Jubilee celebration themed “Honouring Our Heroes” held at the Nigerian Shippers’ Council Headquarters in Lagos on Thursday, the Executive Secretary of the Nigerian Shippers’ Council (NSC) Mr. Emmanuel Jime noted that the robust relationship between the association and the management of the council have immensely contributed to the development and welfare of all staff members and the association at large.

The Executive Secretary, NSC who was represented by the Director of Human Resource Management, Mrs. Adaku Okam commended the efforts and contributions made by past and present executives.

He however called for the continued support of the management and all members of the association in order to achieve greater feats.

“Everything we have achieved today was due to the efforts and contributions of our past heroes in the association and the robust relationship between the Management and the Union.

“Let us continue to push on collectively to achieve more success. To whom much is given much is expected.
The reward for good work is more work. Dear colleagues, let’s continue to do the good work because we strongly believe that together we can be better” Jime said.

Also speaking, the pioneer Executive Secretary of NSC, Dr. Kingsley E. Usoh in his goodwill message, noted that the association under the Council has trained great and superior manpower compared to any agency of government since its inception.

Speaking earlier in his welcome address, the President of the Association, Comrade Christopher Faloye stated that Silver Jubilee Celebration was aimed at appreciating all those who have contributed to the success story of the Association as well as the Management of the Council for creating the conducive environment for all staff to carry out their statutory duties and activities without stress.

Faloye noted that the association which started its journey in 1997 has made several milestone achievements, adding that the promotion of staff members before now had not been very smooth or timely but now, a three years eligibility for promotion is now been adhered to.

He also noted that under his tenure, the association has been able to get approval for the initiation of a yearly payment of Children Education Grant, Exit Allowance and also pushed for a 30-Working Days Annual Leave for staff members.

“Since the commencement of this tenure, we have maintained a cordial Industrial relationship with our Management, which is manifesting in the peace and tranquility we all enjoy at NSC today.

” Before now, it could span up to five years, or more before the promotion exercise was conducted but since we came on board,we have received cooperation from Management, and promotions have been done as at when due.

“The Union was instrumental to the Exit Allowance which came into effect at the Salary Enhancement NSC secured in 2017 but became effective in January 2018.
“This is enjoyed at the exit point. We also pushed for a 30 -working day Annual Leave under our indefatigable ES/CEO Comrade General, Barrister Hassan Bello, the immediate past Chief Executive” Faloye said.

On his part, while presenting a paper titled “Understanding Organizational Ownership: Partnership That Works”, the immediate past Treasurer of the Petroleum and Natural Gas Senior Staff Association (PENGASSON), Comrade Victor Ononokpono elucidated on the importance of collaboration and partnership between the management and staff of any organization.

Ononokpono noted that beyond external relations with key agencies outside every organizational structure, the success and achievement of the mandate of such an organization is hinged on the internal level of partnership and support from every player in the organizational system.

” He however called on the need to grow partnership structures between the Association and the management of the Council so as to achieve great success in all activities.

The high point of the event was the presentation of awards to the past Chief Executive Officers (CEOs) of the Council which include: Dr. Kingsley E. Usoh, Chief Adebayo Babatunde Sarumi, Captain Adamu Biu, Barrister Hassan Bello, and Hon. Emmanuel Jime; Past Presidents of the association include; Comrade Sidi Ali, Comrade Moses Olayemi Fadipe, Comrade Mukhtar Adikwu, Comrade Christopher Olatunji Faloye, and other deserving heroes of the association.