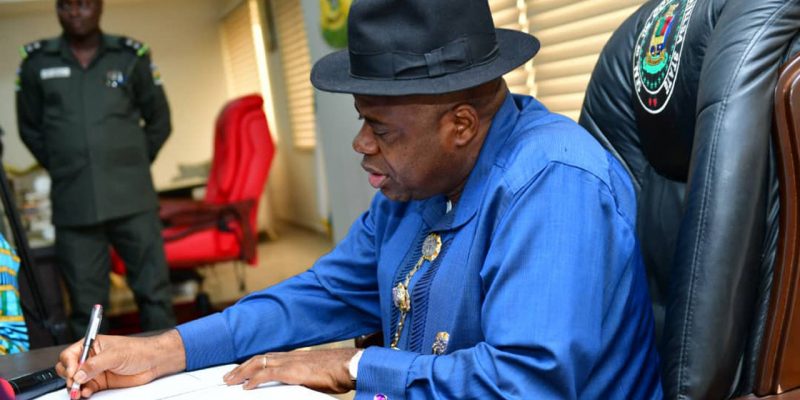 The Bayelsa State Government has peacefully settled the dispute between the Nigerian Navy and some landlords at Agudama-Epie community.

The State Governor, Douye Diri speaking in his office at Government House in Yenagoa, when he received the report of the committee set up to look into the issues, noted that available facts showed that the Navy were the rightful owners of the land, which was being disputed.
The Chief Press Secretary to the governor, Mr. Daniel Alabrah, in a statement quoted Diri as lauding the committee headed by Secretary to the State Government, Dr. Konbowei Benson, for doing a good job.
He added that the committee with their report, prevented bloodbath.
The governor also hailed the Navy for its perseverance during the period of the committee was carrying out its duties, saying that there’s need for individuals and groups, particularly security agencies, to work with the government to sustain the prevailing peace in the State.
Diri in the statement, posited that the government was poised towards the peaceful co-existence of residents of the State.
He also used the opportunity to commend the former landlords for not taking the laws into their hands by reporting the issue to government for necessary action.
“We would have had a bloodbath but the work of the committee averted that. We are here not just receiving the report. Actually the report is that there was no dispute between the Navy and those who bought the land without first of all ascertaining if it was encumbered.
“Clearly, the Nigerian Navy had no other contender to the land. Maybe the only person who would have had issues with the Navy would have been retired Rear Admiral Festus Porbeni who sold it. So, the Nigerian Navy did not commit any offence.
“Going forward, before you purchase land, visit the Ministry of Lands and Housing. The lawyers say that ignorance is not an excuse under the law. What you did was to buy a land that had already been bought by the Navy and in the process you slowed down their pace of development,” he said.
Diri, however, averred that the disputed land was sold to the Nigerian Navy by Rear Admiral Porbeni (rtd).
He also buttressed that the Navy was the rightful owners of the land.
Diri clarified that the State government would look into matter of compensating the landlords administratively and a decision communicated to them through the Ministry of Lands.
Meanwhile, the Chairman of the committee, Dr. Konbowei Benson, in his address, noted that it discovered that the Navy was the rightful owners of the land but as part of its recommendations, appealed to the governor to support the former claimants to relocate in order for peace to reign