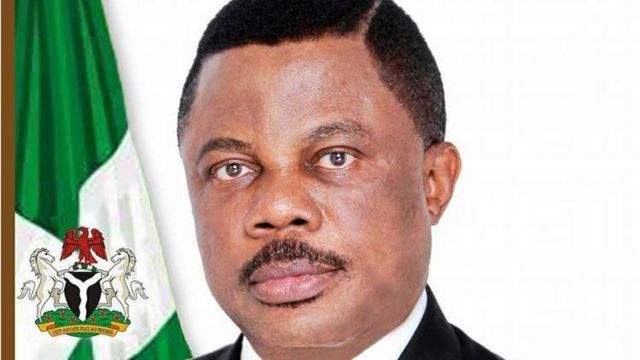 The Executive Governor of  Anambra State, Dr Willie Obiano,has resolved the purported land tursle on which the International Cargo Airport was beibg constructed.

The social media was agog recently that some purported women from Umueri in Anambra-East local government area protested half naked at the construction site of the International Cargo Airport over what they termed forceful land-grabbing by government to build the airport.

Reports also had it that the said protesting women from Umueri had accused the state government of encroaching into areas the community didn’t release to them. But the traditional ruler of Umueri His Royal Majesty Igwe Sir Ben Izuchukwu Emeka stated unequivocally that such reports were malicious and economical with the truth because nobody protested naked and that his subjects were not known for such amoral behaviour.

Igwe Emeka stated that Umueri was grateful to the government and people of Anambra state that the International Cargo Airport was being built in their domain and that the socio-economic transformation the facility would bring to the community, Anambra and the entire Southeast region can not be overstressed.

According to the statement, the governor and the government of Anambra state have returned the portions of land in dispute to Umueri community.

The statement reads, ”The President, Umueri American Heritage Foundation, USA. Dear Brothers and Sisters, Greetings from the Royal Palace of Umueri Oke Ebo, I bring to you good news from the meeting held between my humble self, Dr Egbuna Okechi, some stakeholders of Ivite Umueri and His Excellency, Dr Sir, Willie Obiano, the Executive Governor, Anambra State with some members of His Exco at Governor’s Lodge, Onitsha.

“His Excellency, the Governor has agreed to release back to Umueri Parcel D of our land measuring 288 hectares. He instructed the Hon Commissioner for Lands and the Commissioner for Justice to prepare letter of release to our Community.

“His Excellency the Governor promised to award contract for the dualization of the road from Community Secondary School, Umuatuolu to the Airport main toll gate. He instructed the Hon Commissioner for Works to process the documentation. So the rumours making the rounds that the government is blocking the road with perimeter fencing is hereby put to rest.

“The name of the Airport is called and shall be called Anambra State International Cargo Airport, UMUERI. So the rumour of weather it is Nteje/Umueri or Umueri Nteje Airport is also put to rest.

“These are the three major areas that we discussed and achieved. On behalf of the entire Umueri Community, I sincerely and immensely thank His Excellency, Chief Dr. Willie Obiano, the fatherly role he played in resolving this whole Airport land matter.

“I thank and also congratulate my people for our doggedness and peaceful disposition at the time of protest. Let me also thank the security agents who were drafted to protest ground for their peaceful and professional management during the crisis period.”