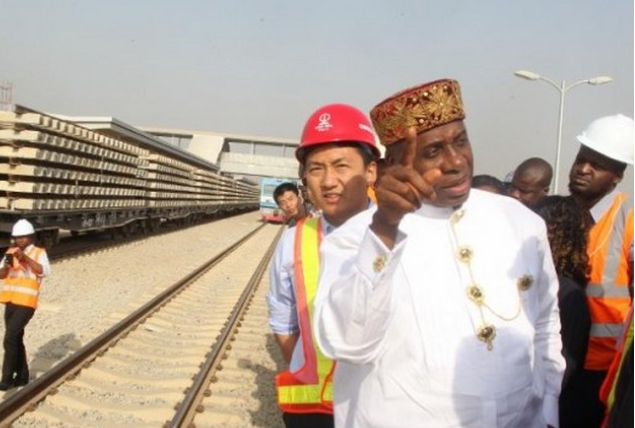 Minister of Transportation, Rotimi Amaechi, has recommended that anyone caught engaging in vandalism of railway facilities in the country be charge with manslaughter.

According to him, applying stringent laws will curb the deadly act, which can cause train derailment and killing unsuspecting passengers.

The Minister lamented that railway clips are frequently stolen, causing the country huge sums of money in foreign currency to replace.

Recall that the Police had last week, arraigned suspected railway vandals at the Federal High Court sitting in Lafia, the Nasarawa State capital.

The police charged the suspects for conspiracy, economic sabotage, and terrorism while the lawyer of the Chinese national is charged for aiding, facilitating, and abetment of terrorism for offering a bribe to the police to aid the escape of his client.

Speaking on the consequences of the rail facility vandalism, Amaechi stated: “That’s why I say to Nigerians that if I were to be a lawmaker, I’ll be recommending manslaughter charge against those who engage in vandalisation of rail tracks.

“The reason is that it takes about 800 metres for a locomotive to stop. As it’s running now, it is running with speed. The moment it wants to stop, the driver will apply break here and it will take 800 metres to stop.

“So, how will the driver know that you have removed or vandalised a track 800m away? He will not know until it gets to the track.

“So, when it gets to the track, what happens? He applies break. But he needs 800m to stop. So, once it gets to that track that has been vandalised, he will derail. Once it derails, some people may die.

“Each coach takes 85 persons. And we are talking about 14, 20 coaches. You can imagine the number of people that will die as a result of that derailment.

“This is just because one selfish Nigerian is trying to steal track to make money. I think like other countries, I’m not saying that they should be killed because there’s poverty. But I’m saying they should be charged for mass manslaughter because people will die.

“We are looking for possible company under Public Private Partnership (PPP) agreement that will take over that. If they take over, we will remove the old track and replace it with new ones.

“But when they now move to Itakpe-Warri, which is now standard gauge, brand new tracks, then it becomes very dangerous. A poor man from Warri who is going to Itakpe by 6 o’clock train does not know that his train will derail because somebody has cut off the track. That is dangerous.

“And I think that the solution is exactly what the government is doing now about insecurity.”

On why the law of the land and should be strictly applied: “You see, I have always said that if you enforce the law, Nigerians will obey.

“Now, you are feeling a bit of security. Now, you can drive around and feel a bit secure more than before. It is because the government has said that this joke has to stop.

“The joke has started stopping. Is it not? That is what Nigerians like to hear. That is the way I governed Rivers State. When the person knows that there is law and as an elected governor, I will enforce the law.

“So, if the law means to shoot my brother, I will shoot him. That is what the law says. Since you see the security agencies enforcing the law, everyone is now behaving well.

“So, if we enforce the law on the vandalisation of tracks, it will stop. And I have asked the Managing Director of Nigeria Railway Corporation (NRA) about their police.

” He said they were enough. I will meet the Inspector General of Police (IGP) to give us enough men and materials so that we can use them to police the tracks.
“Having moved from narrow gauge to standard gauge, it has become a national security issue because it’s a daily movement, involving three, four, five, six trips a day..”

Regretting the cost of losing rail tracks to thieves, the Minister further remarked: “The only one I have made a decision are those stealing the clips. Like Kaduna-Abuja, over 6,000 to 10,000 clips have been stolen and have to be replaced daily so that we don’t have a situation where the train derails.

“These clips are not made in Nigeria. They are bought overseas. So, we buy them in dollars.

“But we need to now go back to Abuja-Kaduna and change them to anti-theft clips. I don’t know why we have not made that decision earlier because we have changed up to 10,000 to 15,000 clips in six years.

“I think the law should deal with those who break it. The law should not be quiet. I don’t know what the law says. But a Chinese company arrested for buying those tracks got away with over N200,000 fine.

“The law should give us much more than that. We got a Chinese company in Jos buying those from them. Few months later, we arrested a Chinese man in Nasarawa. That is the issue of vandals.”

The Minister further disclosed that President Muhammadu Buhari will launch the construction of Kano -Kaduna rail project in the next few weeks.

The Minister also disclosed that the Federal Government has committed the sum of $280 million for the $1.2 billion for Kaduna-Kano rail, which is set to begin in two weeks and another further $100 million will be added in the coming weeks, and that funding may rise to $600 million by the end of the year.

The Minister explained that funding for the new project will come from the federal budget while Chinese financing is being awaited.

Amaechi said he is adopting a model that can help minimise external borrowing.

Nigeria owed China $3.4 billion as of March 31, according to the Debt Management Office. The amount covers 11 loan facilities from the China Exim Bank since 2010.

He said, “In the next two weeks, we should be launching and commencing immediately the construction of Kano-Kaduna rail project.

“The President will be launching it and then we will commence construction immediately.

“The reason why we are commencing construction immediately is that all the necessary contracts have been awarded.”

“So, we decided to fund it from the budget. We already paid $218 million dollars to them and we are about to pay another $100 million to make it about $318 million.

“Kano-Kaduna is about $1.2 billion – the moment you pay about $318 million, you must have paid one-third of the project.

“So, we believe that by the time we get the loan we must have funded up to $600 million.

“So, that should be able to take the project nearly halfway before the fund will come because if we continue to wait for the loan whether, from China or Europe, we may likely not complete it before we go.”

Amaechi also affirmed that that the Lekki deep sea port will be completed before the end of the present administration.

Amaechi revealed that Nigeria and China have signed a contract to manufacture train coaches locally in the country following an initial five year period of just the local assembling of the components.

Similarly, he said an agreement has been signed for the Chinese to build a rail component manufacturing factory in Kajola, Ogun state due to be commissioned in 2021 and as well, a University in Daura, Katsina state to help localize railway technology.