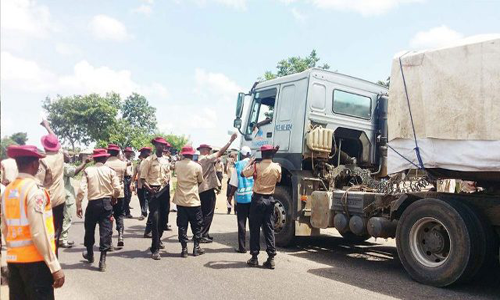 The Minister of Transportation, Rotimi Amaechi, has called for the review of the highway codes to ensure stiffer penalty for road traffic offenders.

Amaechi made the call at the Easter mega rally organised by the Federal Road Safety Corps (FRSC)  in Abuja.

He said that the review of the highway codes would also help curb the issue of road traffic crashes in the country.

Amaechi said that there was the need for road users to be aware of the stiffer penalty attached to recklessness on the highway.

He said that education, enlightenment and enforcement were major ways of sensitising the public, adding that a mega rally would help road users to understand the implications of driving recklessly.

Amaechi added that the ministry and the FRSC would work together to ensure that the law was reviewed and takes effect so that lives and properties would be saved.

According to him, if a driver knows that he will go to jail if he drives recklessly, he will take caution.

“It will be easy for the drivers to understand this when you tell them and that is why we are here today to ensure that we have a safe celebration now and beyond.

“A situation where by the law is reviewed and categorically states that when you overload your vehicle, drunk drive or drive recklessly, you will be jailed, then, every driver will be conscious.

“Most accident you see today are not caused by bad roads but the recklessness of the drivers on the roads.

“I want to urge all drivers to be cautious of not just them but the passengers they carry. Safety is paramount, ” he said.

The Corps Marshal, FRSC, Dr Boboye Oyeyemi, commended the transport unions for ensuring that vehicles were not overloaded from the parks, adding that the union had also help in observing the COVID-19 protocols.

Oyeyemi noted that the major problems the corps was facing at the moment were crashes at night, adding that 200 lives were lost in January alone.

He added that although the crashes had reduced, the corps was working towards reduction to the barest minimum in the second quarter of the year and even beyond.

Oyeyemi assured the public on improvement of the corps by second quarter, saying that FRSC would bring in more measures that would help the corps to an acceptable level.

In his address, the Corps Public Education Officer, Assistant Corps Marshal Bisi Kazeem, said that road traffic crashes “do not just happen, adding that they were caused and could be prevented.

He said that with obedience to traffic rules and regulations, road traffic crashes could be reduced.

Kazeem said that Easter is a period of high human and vehicular traffic for which the corps always make adequate preparations for effective traffic management.

“Mega rallies like this also afford us opportunity to expand our campaigns to larger participants, especially at the motor parks to enlighten, warn and educate drivers.

”We used opportunities like this to educate members of the public on the need for them to be safety conscious while using the road, ” he said.

The representative of Nigerian Association of Road Transport Owners, Mr Yusuf Othman, urged FRSC to extend the initiative to tanker drivers, adding that it would help reduce tanker crashes in the country.

NSC collaborates with NIWA to harness potentials of waterways transportation.