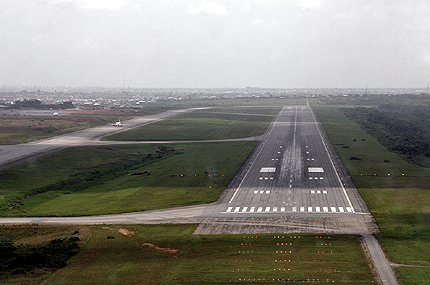 Abiola Seun Airline operators, under the aegis of Airline Operators of Nigeria (AON), have kicked against the closure of the Lagos airport 18/Left by the Federal Airports Authority of Nigeria (FAAN), for the commencement of the installation of airfield lighting.The operators lamented that the runway which had been closed for more than a week was painful because there is no evidence of any work done, a situation they stated has made airlines to be burdened with huge but unnecessary additional costs, flight delays and cancellation of flights to the airports.The operators, in a letter to the Managing Director of FAAN, Capt. Rabiu Yadudu, entitled, “Closure of Runway 18L at the Murtala Muhammed Airport”, dated July 15, 2022, and signed by AON President, Dr. Abdulmunaf Yunusa Sarina, they said the association received with surprise, the Notice to Airmen (NOTAM) on July 5, 2022, informing the industry that FAAN would be closing the domestic runway 18L Murtala Muhammed Airport from July 8, 2022, for a period of 90 days.They decried the short notice given to them by FAAN, noting that FAAN still went ahead to close the runway, causing unsustainable additional operating costs and severely inconveniencing the airlines and passengers.While welcoming the efforts by FAAN to install runway lighting on runway 18L that had taken more than 16 years to fix, they noted that international best practice for such critical airfield infrastructure projects is for the airport operator to enter into discussions with all affected parties, to arrive at an optimal arrangement that allows the work to be done, while limiting the inconvenience, economic impact and safety implications on all concerned.They knocked the FAAN for failing to carry the operators along before the closure of the runway.“FAAN is aware of the current existential threat of aviation fuel prices to the domestic airlines. The closure of the main domestic runway of the Lagos airport automatically adds an additional 10-15 percent more fuel costs per sector into and out of MMA based on the additional costs within the first week of the closure of the runway. This unnecessary burden is unsustainable for a three-month period on the airlines”.“The closure of the runway has led to a chain of direct flight delays on a delayed basis, impacting the entire system of scheduled domestic flights in the country. FAAN is aware that most domestic flights originate from or pass through MMA at some point every day. This is an unnecessary additional negative outcome for the industry,” they stated.The operators contended that in line with the international best practice, runways of airports are only closed when there is no other option, stressing that for infrastructure projects such as the one on 18L to limit the impact on flight operations, FAAN ought to have ensured that the contractor does the work at night when the runway is not in use.The carriers stated further, “For the major airport in Nigeria, AON notes with disappointment that runway 18L has been closed for a week now, with no evidence of any work going on. Yet airlines have been burdened with huge but unnecessary additional costs and flight delays. Surely, this situation is not in the best interests of the industry.”“Moreover, the additional taxi time due to closure of runway 18L impacts negatively on airlines schedule to sunset airports around the country leading to delays and cancellations of flights to these airports”.They, however, requested FAAN to convene an urgent stakeholders’ consultation meeting, to achieve their demand.