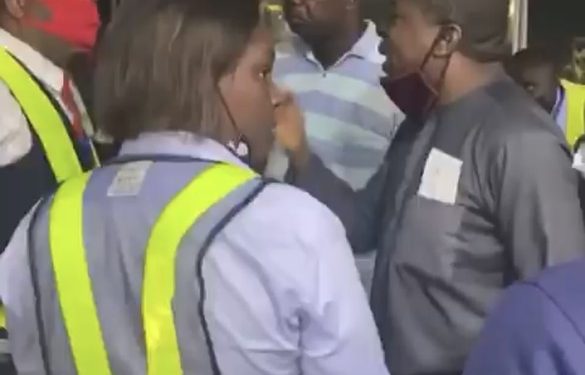 Air Peace has denied arresting a passenger who was supposed to be on a 19:20 Lagos-Abuja flight on Tuesday, September 28.

Reacting to a video trending on social media showing passengers protesting at the airline’s stand over flight delay, the airline said those in the video were supposed to be on a 19:20 Lagos-Abuja flight but were unable to do so because of operational concerns.

The airline said 46 of them were put on a flight that departed at 19:16, leaving behind 46 passengers.

The airline further said the delay was professionally communicated to the passengers and they apologised for the inconvenience. The airline said, however, one of the passengers became violent and began attacking a member of staff and the security department of the Federal Airport Authority of Nigeria (FAAN) had to be notified and the passenger was taken away.

‘We have noticed a certain video portraying Air Peace in a bad light on social media and it has become imperative that we clear the air and correct the impressions created.

‘The passengers in the video were supposed to be on a 19:20 Lagos-Abuja flight but consequent upon tenable unforeseen operational concerns, the flight was delayed. We put 46 of them on a flight that departed at 19:16, leaving behind 46 passengers. The delay was professionally communicated to the passengers and we apologised for the delay and inconvenience.

‘However, a certain male passenger who suddenly became uncontrollably irate assaulted our boarding officer. This was clearly unnecessary and despicable.

“We were about distributing refreshments in consonance with NCAA regulations, but his action disrupted the process and noise erupted from different quarters while he incited other passengers against the airline.

‘FAAN Security was notified as the passengers were now trying to gain entrance to the airfield even when the aircraft was not yet on the ground.

“FAAN was compelled to lock the boarding gate to prevent the passengers from going to the ramp, a highly regulated part of the airport.

‘At 22:35, we called for boarding for the remaining 46 passengers. Due to his behaviour, the passenger was arrested by FAAN security. The action was taken in the best interest of the passengers and the airline.

“Also, the lady who recorded the video being circulated, without the consent of those being recorded, was arrested by FAAN security who repeatedly told her to stop recording.

“The arrests of both passengers were done by FAAN security in line with their standard procedures.

‘Again, we sincerely apologise for the inconveniences experienced by the passengers as a result of the flight delay as it was caused by unavoidable operational factors.

” Air Peace is committed to providing Nigerians safe and seamless connectivity across cities and will not deliberately delay flights,’ the airline stated.