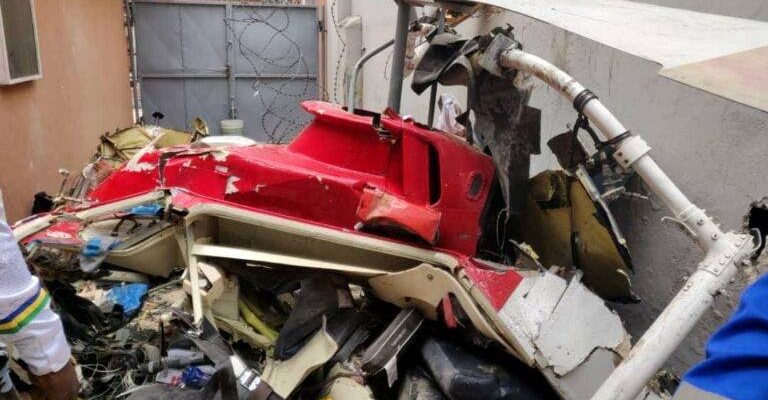 The reports were read by the Bureau’s Commissioner, Mr Akin Olateru ,at the Abuja Corporate headquarters of the investigation agency.

The report, which covered the period between 2018 and 2020, were those of accidents that involved: Quorum Aviation Limited’s Bell 206B3 Helicopter with registration 5N-BQW which occurred at Opebi, Lagos State on 28th August 2020.

The bulletin report released was the one on the ground collision involving a Central Bank of Nigeria (CBN) Truck with registration AKD765FK and Nigeria Air Force (NAF) Bell 412 Helicopter with registration NAF 600 which occurred at Nnamdi Azikwe International Airport, Abuja on 15th June 15, 2020.

The reports, however, indicated that human factors played prominent roles in the causes of the accidents and the serious incidents.

Speaking on the reports, Olateru said: “The reports we are releasing today cover the period between 2018 and 2020.

“While two are classified as accidents, two are serious incidents and one safety bulletin. It is, however, important to note that investigation of aircraft accidents or incidents entail the same procedure and processes, all geared towards the same destination – air safety.”

He, however, regretted that one of the accident reports had three fatalities.

With these reports, AIB had released a total of 72 accident reports since its establishment in 2007 and a total of 53 reports released since the inception of this administration.

According to Olateru, the five reports contained a total of twelve safety recommendations, which were addressed to the regulatory body, Nigerian Civil Aviation Authority (NCAA), the affected airlines, the Federal Airport Authority of Nigeria (FAAN) among others.

On the accident involving Quorum Aviation Limited Bell 206B3 Helicopter with registration 5N-BQW), AIB in its findings discovered that the plane suffered fuel exhaustion at low altitude and low speed leading to loss of control in flight which was the main cause of the accident

It also attributed the contributory factors to the accident as: The decision to continue the flight towards the intended destination with insufficient fuel instead of landing as soon as practicable in line with section 12.12 of Quorum Aviation Limited Operations Manual Part A.
Also, lack of effective management supervision of the airline’s flight operations was noted.

Quorum Aviation Limited was also told to ensure that all its personnel were well acquainted with their respective schedules of responsibilities and capable of discharging their duties effectively in accordance with the company’s Approved Standard Operating Procedures.

On the accident involving Skypower Express Airways Nigeria Limited Air Tractor AT-401B Aircraft with registration 5N-BTV), the bureau reported that the causal factor was as a result of an undetermined engine failure at low altitude that necessitated the execution of emergency forced-landing on farmland.

No safety recommendation was made by the investigation agency

The third report which was on the serious incident involving Nigeria Police Airwing Bell 429 Helicopter with registration 5N-MDA) that occurred on August 3 2019, the causal factor was attributed to the lack of communication to update the crew on the current serviceability status of the ground handling wheel prior to arrival at DNAA.

It gave the contributory factor as the decision to hover-taxi to reposition the helicopter to the ramp without guidance.

It was recommended that Nigeria Police Airwing should develop a proper communication procedure for departing and arriving aircraft for information dissemination where necessary while it should adhere to all relevant provisions of Nig. CARs.

On the serious incident involving Skypower Express Airways Nigeria Limited Cessna 172 Aircraft, AIB reported that the Causal factor was the shifting of engine oil seal at the top of the push rod which created a clearance through which the oil escaped from the engine; resulting in low oil quantity and high oil temperature indications and subsequently a drop in engine rpm.

The fifth issue made public by AIB-N was the bulletin-Report on the ground collision involving a Central Bank of Nigeria (CBN) Truck with registration AKD765FK and Nigeria Air Force (NAF) Bell 412 Helicopter with registration NAF 600).

The Accident Investigation Bureau (AIB-N) Nigeria, reported that the Causal factor was the driver’s poor judgment of the clearance between the truck and the helicopter main rotor blades.

It gave the contributory factors to include the fact that the truck driver was not professionally, technically qualified to operate the truck at the airside.

It also adduced a lack of training and proper sensitization of CBN personnel (drivers, security, operations) accessing the airside as another contributory factor.

Even as it advanced that the inadequate oversight on CBN personnel (drivers, security, operations) accessing the airside by FAAN and NCAA contributed to the serious airside incident.

The five safety recommendations include: that the Central Bank of Nigeria (CBN) should ensure that all its personnel assigned to drive vehicles or access all Nigerian Airports are adequately and properly profiled and provided with Airside driving and compliance training.

It was again recommended that the CBN should ensure that all its operated vehicles, equipment and personnel assigned to operate within or drive vehicles or access all Nigerian Airports are provided with appropriate Apron permit and access cards for identification and proper operational control at the airside of all Nigerian airports.

FAAN should ensure that all CBN personnel assigned to drive vehicles at all Nigerian Airports are provided with Airside driving and compliance training while all the agencies and organizations operating at the airside adhere strictly to all provisions of the Airside Vehicle Control Manual.