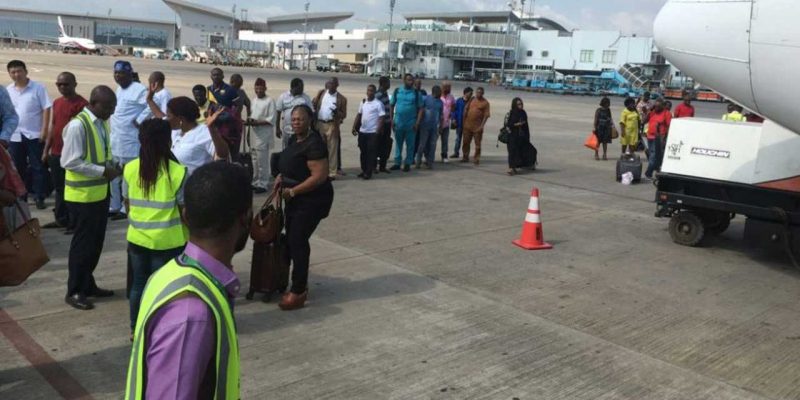 Aviation workers’ unions have bemoaned the perennial poor condition of service in the sector, especially the ministry’s reluctance to create a new guideline and upward adjustment of earnings in the last nine years.

The unions, at the commemoration of the May 1 Labour Day in Lagos, said major decisions were currently being deliberated to put an end to the waiting game and “slavery” of air transport workers.

The unions had earlier notified airlines and the general public of total withdrawal of air travel services in February 2022, in protest against poor welfare and non-release of the agreed Condition of Service (CoS).

Following the intervention, the industrial action was suspended.

The coalition made up of members of the National Union of Air Transport Employees (NUATE), Air Transport Services Senior Staff Association of Nigeria (ATSSSAN) and the Association of Nigeria Aviation Professionals (ANAP), had consistently drawn attention to the government’s failure to release the negotiated Conditions of Service of the six aviation agencies since 2013 and non-implementation of Minimum Wage and Consequential Adjustment since 2019.

National President of NUATE, Ben Nnabue, said it was unfortunate that the twin big issues of Minimum Wage Consequential Adjustment and CoS for the aviation agencies continue to rage unabated.

“But we stand firmly by the decision of workers not to accept continuing shifting of the goal post by government agencies on these issues.

“Therefore, this week has been set out for major decisions and subsequent decisive actions that will bring these issues to a foreclosure.

“Similarly, big local airlines continue to defy the law on free association and union membership, and the promise by the Minister of Labour for his intervention has not been kept.

“Therefore, we are left with our own devices to see to it that all aviation workers, particularly in Air Peace, Azman Air, Dana Air, etc are fully freed from slave labour this year,” Nnabue said.

He added that NUATE is unsatisfied with ongoing discussions around the big question of airport concession.

“We are unclear as to the government’s actual response to the demands of aviation unions on labour issues and many lapses in the concession programme.

” In the coming weeks, important decisions will be made to chart a clear path to ameliorating already stated demands of workers.

“We call on the Minister of Aviation to urgently review his Aviation Road Map and pending welfare issues.

” We hold the view that the projects under the Road Map require significant adjustments to harmonise them with current realities in the world of aviation and our national interest,” he said.

The General Secretary of ANAP, Abdulrasaq Saidu, noted that the influx of inexperienced political appointees is allegedly disrupting the efficiency of the industry.

Saidu blamed the development in absence of a governing board of agencies, which has affected workers’ conditions of service for about nine years.

He added that aviation workers are agitated and frustrated as a result of the neglect, as they were not happy working under the helpless conditions.

ANAP scribe said all unions had done everything possible to sustain industrial harmony but “the aviation ministry remained a clog in the wheel of progress by neglecting workers’ welfare and hijacking the workers’ functions concerning the condition of service”.

He, however, commended workers for their resilience and struggle toward building a greater workforce and urged them not to relent.

Nigeria, Ghana, Togo, others to discuss anti-piracy war in GoG