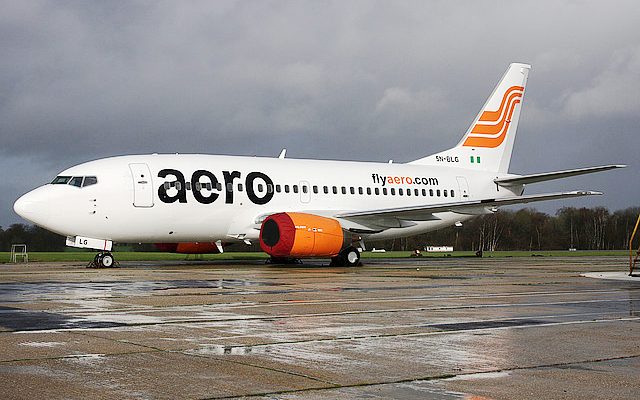 The National Union of Air Transport Employee (NUATE) and Air Transport Senior Staff Services Association of Nigeria (ATSSSAN), have raised the alarm that Aero Contractor airlines was about to lay off 280 of its 700 workforce due to the financial crisis rocking the airline.

In a press briefing in Lagos on Monday, the general secretary, NUATE, Com. Ocheme Aba and deputy general secretary, ATSSAN, Com. Frances Akinjole, said the airline has officially written to the unions its intention to reduce workforce by 40 percent because of their inability to pay workers’ salary.

The union leaders who said Aero Contractor has over 700 direct workforce, disclosed that the airline ran into problem due to its alleged leasing agreement with House of 5A, which took over juicy routes of the airlines and allegedly pushes aero contractor’s aircraft to fringe routes that are not lucrative.

The unions, however, called on the National Assembly, Aviation Minister, Sen. Hadi Sirika, Minister of Labour, Chris Ngige to intervene in the crisis rocking the airline, as well as save the industry from imminent disaster.

“As we speak, the management of Aero, has written to us wanting to reduce their staff strength by 40 percent. That’s official. They said they cannot cope anymore and because of that, they are proposing that the 40percent will go on unpaid leave without any redundancy benefits, that are established facts,” he said.

He stated further, “Salaries are being owed for upwards of two months. Conditions of Service have remained unilaterally suspended. Even last week, after the CEO fouled the industrial atmosphere with his shutting down press goof, he convened a staff town hall meeting with the plan to provoke an unrest, knowing that workers have become restive. But, seeing through the plan, workers boycotted the meeting. Fortunately so far, in all these, the Unions and workers have refused the bait. We are aware that this has left the evil planners frustrated.”

“It would appear that the hidden forces are hell bent on forcing a shutdown of Aero Contractors. Should they succeed, over 700 direct aviation jobs will go down the drain. A very solid aviation brand will become history.

Nigeria’s flourish- and-flounder phenomenon in the aviation industry will once again come to the fore and the prospect of a growing aviation industry in Nigeria will receive a major setback. This would be unfortunate indeed.”

The union leaders, however, debunked reports that Aero aircraft are too old to fly saying the claims are unjustified and orchestrated plan to compel the airline out of existence by some hidden forces.

“The CEO’s assertion that Aero’s planes are too old to fly are completely false, even if aided by internal misinformation. The fact as we know it, is that, Aero operates the B737 Classic generation, the oldest of which just clocked 30years. This class of aircraft are able to operate up to 85,000 cycles, or 100,000 flight hours as approved by the Manufacturer, Boeing. None of these aircraft in Aero’s fleet has operated up to half of the approved figures.

“We stand to be proved wrong. While it is true that older aircraft do have higher maintenance costs, it must be borne in mind that the Airline owns an approved Maintenance & Repair Organisation (MRO) with elite Engineers in its fold. Till date, there is no report from the MRO, or the Nigerian Civil Aviation Authority (NCAA) that any aircraft operated by Aero is too old to be maintained, or to fly.

The unions said they were bringing all these oddities to the fore so when they take action they would not be told that it was unexpected and without consultation as already they have had course to write the management of Aero on the issues enumerated without response.