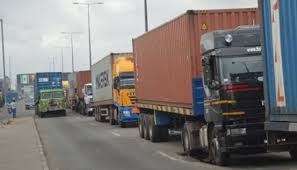 Not less than 65 percent of dry cargo trucks in Nigeria will be affected if the government makes good its threat to fizzle out trucks that have stayed for thirty years and above on the port access roads.

This is the fear of some truck owners in some corners who want government to thread gently in implementing the policy.

Mohammed Inuwa Abdullahi, Chief Executive Officer of Gee Gee Global Enterprises, a trucking firm,in a chat with newsmen on Wednesday, expressed fear that  not less than 65 percent of the trucks playing the port access roads in Nigeria would be affected if the government decides to implement the policy.

He added that if there are no adequate arrangements put in place before take off of the policy, it would lead to massive loss of jobs.

According to Abdullahi, irregular governmemt policies do not help matters as importers and manufacturers have no enabling business environment that could make them release money to truck owners to purchase new trucks.

He maintained that truck heads now cost not less than 30 to 35 million naira.

As a result, he called on the governmemt to work out a plan for truck owners to get loans to purchase trucks to be able to meet up with the required new standards.

“If you are talking of how many trucks will be affected, about 65% of trucks in Nigeria are almost within the bracket of 30 years, mostly from dry cargo

“If there is no adequate plan arrangement before the policy takes off, it means many citizens will be out of job and we should remember some part of the country they can not go to their farm and farm and majority of them are now the loaders and off loaders at their various places, even some are now drivers and motor boys”

“The Government have to do the needful before the implementation .
As per the cost of a brand new truck, you need to have between 30 to 35 million Naira for only the head without the back body.

“That’s why many people go for Tokunbo which cost between 13 – 15 million Naira for the head alone .

“Manufacturing companies that produce goods and commodities, Importers that we render services to, are not having long time Government policy that creates enabling environment for them so that they can release funds to us to change some of the trucks.

“However the Government should equally set a plan on how the transport owners can access loan with low interest so that they can buy the new trucks and government should be mindful that removing one truck out of the road is like you are removing food from the mouth of more than 30 people, that’s from the owner, driver, motor mates, commission agent, mechanic, labour and their families,” he submitted