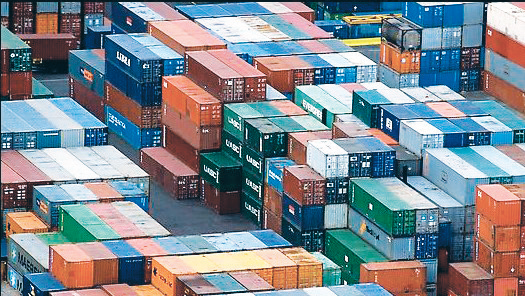 Abiola Seun Clearing agents operating at the nation’s seaports, on Thursday, lamented that over 400,000 containers are currently trapped at the Lagos seaports over suspension of Guarantee Trust Bank Limited by the NIgeria Customs Service (NCS),portal.Recall that the Customs Service, acting on the directive of the National Assembly, suspended GT Bank over the bank’s alleged non remittance of import duty to the federal government.However, speaking to newsmen, the National President, Association of Nigerian Licenced Customs Agents (ANLCA), Kayode Farinto, said over N40billion demmurage and storage charges have been accrued by importers and clearing agents.“The amount that Nigerian importers are losing as a result of storages and demurrages is running high and the problem is not yet over.

“These consignments are still trapped in the port and agents cannot clear them. Even some who have made assessments cannot pay duty. It is running to over N40 billion now and that is very unfortunate,” Farinto said.Speaking further, he said “We have a situation on the ground where nobody is talking to Nigerians.
” Nobody is talking to freight forwarders or Customs brokers. That is why there is a need for us to make the world know what is happening in the maritime industry. “We have a situation whereby GTB must have erred through the issue of reconciliation. We heard that GTB has not remitted some hundreds of billion to the federation account and they have collected this money on behalf of the Federal Government and that was what led to their suspension.“The Committee of Customs at the National House of Assembly directed Customs to suspend GTB from the portal. GTB has been suspended and some consignments have been trapped.
” As I talk to you over 400,000 containers throughout the federation who open their Form M cannot proceed further because they haven’t gotten their Pre-Arrival Assessment Report (PAAR), because they must pay the duty through the Commercial or dealer bank where you have opened your Form M and they are currently trapped.He also stated that imported vehicles are also trapped at various terminals in the ports.“Also, there are over 40 percent of vehicles that need to be cleared from the seaport who have gotten assessment but cannot move ahead.
” There are people who have actually paid duty and as a result of the suspension, the status has not changed on the Customs portal and they cannot move forward in the area of clearance of the goods.
” Hence, we are calling on freight forwarders to make sure that from  the 6th of September, 2022 they should not open their Form M or make any assessment or transaction through GTBank again.”“This becomes imperative in the view of the fact that nobody is even talking to us. We sent a letter to GTB on this particular issue for them to address us and let us know what is happening but everybody is avoiding us.”