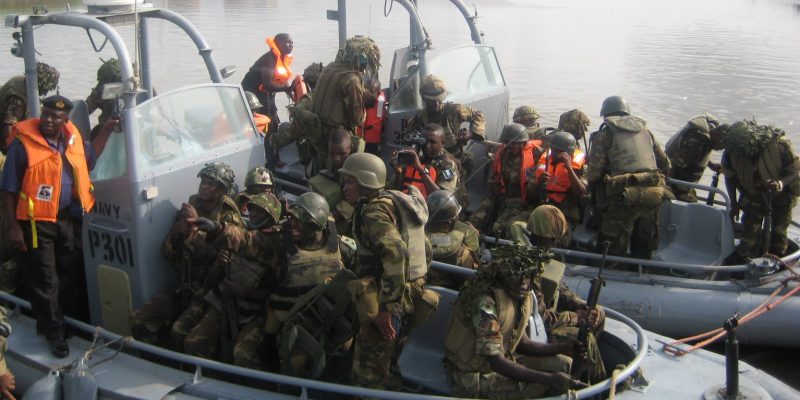 Abiola SeunThree suspected oil thieves have been arrested with 19 drums of Premium Motor Spirit (PMS), allegedly stolen.The suspected oil thieves who were arrested by the Nigerian Navy, Forward Operation Base, FOB, Ibaka in Mbo local government area of Akwa Ibom State were arrested  alongside a wooden boat laden with the stolen boat.The Base Operating Officer Lt.-Cdr. Daniel Onyemaeze, who disclosed this on Thursday said the suspects and exhibits were intercepted on Monday during routine patrol along Effiat waterways.Onyemaeze who spoke at Ibaka while handing over the suspects and exhibits to Candidi Odo, Superintendent Corps of the prosecuting agency, the Nigeria Security and Civil Defense and Corps (NSCDC), for further investigations and actions.He explained that the 19 drums of suspected PMS that were intercepted contained 250 litres each.

He warned perpetrators of illegal oil bunkering, oil theft and other criminal activities to desist from such acts before long arm of the law would catch up with them.“This morning the FOB Ibaka is handing over three suspects with 19 drums of product suspected to be Premium Motor Spirit (PMS) to Nigeria Security and Civil Defense and Corps (NSCDC).“They were intercepted by our personnel at FOB Ibaka during routine patrol along Effiat waterways. This is in line with the mandate of the Chief of Naval Staff to curtail illegal and criminal activities on the waterways,” Onyemaeze said.Receiving the suspects and exhibits, the Superintendent Corps of NSCDC, Odo commended efforts of the Nigerian Navy towards reducing illegality on the nation’s waterways to the barest minimum.“We express our gratitude to the Nigerian Navy, FOB Ibaka for the correlation that has existed between Navy and NSCDC.
” I enjoin Navy to continue in their good works, and we promise them that we will never fail in carrying out further investigations and persecution of the culprits”, Odo said.