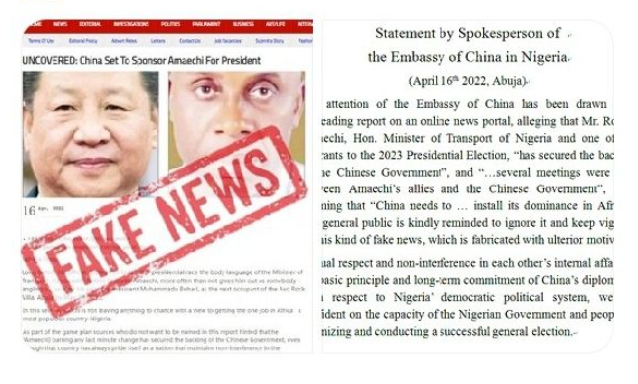 The Chinese Embassy in Abuja has refuted a media report claiming that China has thrown its weight behind the presidential ambition of Nigeria’s Minister of Transportation, Chibuike Rotimi Amaechi, to become Nigeria’s President in 2023.

The Embassy debunked the report in a statement issued on Saturday by the its spokesperson, urging the public to ignore such fabricated report.

Part of the statement reads: “The attention of the Embassy of China has been drawn to a misleading report on an online news portal, alleging that Mr. Rotimi Amaechi, Hon. Minister of Transport of Nigeria and one of the aspirants to the 2023 Presidential Election, “has secured the backing of the Chinese Government”, and “…several meetings were held between Amaechi’s allies and the Chinese Government”, even claiming that ‘China needs to … install its dominance in Africa.’

“The general public is kindly reminded to ignore it and keep vigilant on this kind of fake news, which is fabricated with ulterior motives.

“Mutual respect and non-interference in each other’s internal affairs is the basic principle and long-term commitment of China’s diplomacy.

“With respect to Nigeria’ democratic political system, we are confident on the capacity of the Nigerian Government and people of organizing and conducting a successful general election.”