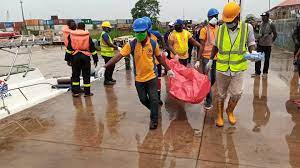 No fewer than 15 persons have reportedly been  confirmed dead after a boat they were travelling in capsized in Mai’adua Local Government Area of Katsina State on Wednesday night.

The ill- fated boat was said to be crossing the river before sudden surge of the tide leading to its capsize.

The bodies of the casualties have since been laid to rest on Thursday in the state at Tsabu town in the LGA.

Among those that attended the funeral for the victims was the state’s Commissioner for Local Government and Chieftaincy Affairs, Ya’u Umar Gwajo-Gwajo,

The commissioner, who offered condolences to the community,also presented relief materials to the family members of the deceased.

The incident came days after a boat capsized in Sokoto state, leading to the death of more than 20 people.